Wendy Williams offered Kate Beckinsale some “mother to mother” advice on her April 16 show, after the actress, 46, was photographed getting cozy with 22-year-old Goody Grace this week. Kate began dating men half her age after her divorce was finalized from Hollywood director, Len Wiseman in 2019. They separated in 2015. Wendy admitted that while she could relate to Kate about being newly single — that’s a stage she says the actress should be done with by now.
“She’s got young boyfriend fever. I get it, when you’re single that’s one of the first things you do — grab a youngin’,” Wendy said from experience. She divorce her husband of 22 years, Kevin Hunter Sr. in April 2019 after he fatherhood a child with his longtime mistress.
Wendy went on to point out that Goody is just one year older than Kate’s 21-year-old daughter, Lily Mo Sheen. “I’m not down with this,” she said about the rumored romance. “In the beginning of being single you do all kinds of things, believe me I know. But then, you settle into your singleness with your cats, your Cynthia, and your hummus,” the host said, talking about her own life. 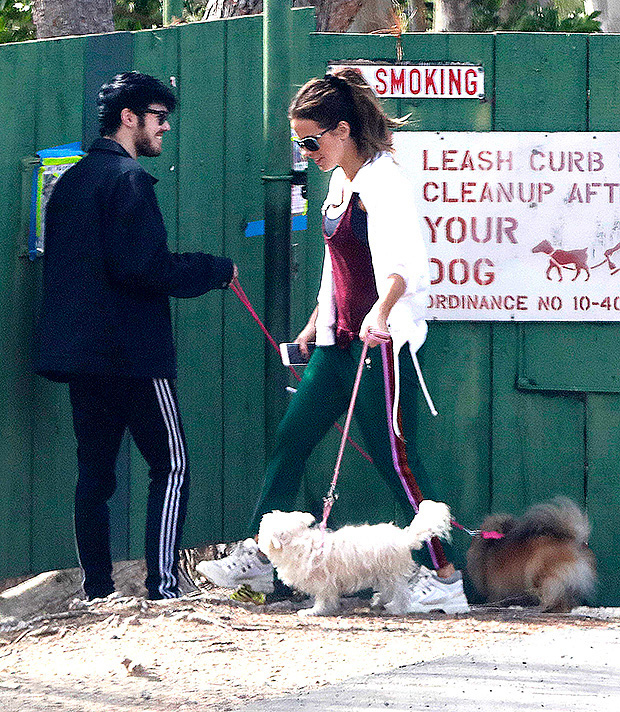 Kate Beckinsale and Goddy Grace out for a walk with their dogs in California on Monday, April 13, 2020. (Photo credit: MEGA)
Shifting gears back to Kate, Wendy unleashed a gloomy prediction about the actress and her new beau.
“Eventually it’s going to come back to bite her in the behind. I’m just saying, mother to mother. You already had Pete Davidson,” she said about Kate’s previous relationship with Saturday Night Live comedian, 26. They dated and showered the paparazzi with PDA moments for four months before they called it quits in May 2019.
“It’s been 4 years [since your split]… you’re 46 and gorgeous. It’s time to get on the good foot and date age appropriate,” Wendy concluded. Despite her critiques, the host did note that she is a fan of the actress.
Kate and Goody sparked romance rumors when they were pictured holding hands together in LA on April 13. Later that day, they were spotted together again — this time, on a stroll with their dogs.
It’s unclear if Kate and Goody, who have a 24-year age difference, are officially dating. While they have not confirmed a romance,  holding hands in public and taking daily walks together usually signals that something romantic is going down. HollywoodLife reached out to a representative for both Kate and Goody.