It’s unclear if the actress and musician, who have a 24-year age difference, are officially dating. However, this level of PDA often signals that a romance is brewing. HollywoodLife reached out to a representative for both Kate and Goody.
Kate’s new rumored beau popped up at an interesting time, seeing as the state of California is under a stay-at-home order amid the COVID-19 pandemic. The order was recently extended to May 15. So, the new photos beg the questions: Are Kate and Goody quarantining together? And, where? The actress resides in California, but it’s unclear where the Canadian musician currently lives. 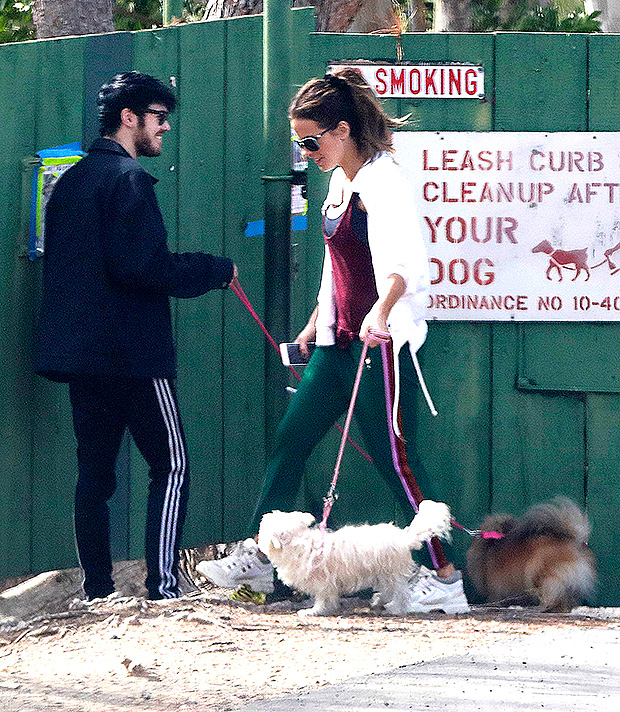 Kate Beckinsale and Goddy Grace out for a walk with their dogs in California on Monday, April 13, 2020. (Photo credit: MEGA)
This isn’t the first time Kate and Goody have been spotted together. Back in January, the two appeared to be more than friends during a random outing, according to TMZ. And, they’re already linked on social media.
Kate and Goody follow each other on Instagram, and she’s even dropped a few comments under his posts. She left a heart-eyes emoji under a video of Goody covering Conan Gray’s song, “The Story” on an acoustic guitar.
Kate has made it no secret that she’s very much into dating younger men. Her last relationship with Saturday Night Live comedian, Pete Davidson lasted nearly four months before things fizzled out around May 2019. Before Pete, she was romantically linked to another 20-something comedian Matt Rife, as well as Jack Whitehall, who’s in his 30s.
As for marriage, Kate said “I do” to her Underworld director, Len Wiseman in 2004. They separated in 2015 and finalized their divorce in 2019. Kate previously dated actor Michael Sheen from 1995 to 2003 and they welcomed daughter, Lily (mentioned above) in 1999.
Goody appeared on Jimmy Kimmel Live at the end of February for a performance of his latest song, “Scumbag,” which features Blink-182. He shared photos from his late night TV debut alongside veteran drummer Travis Barker on Instagram. Goody is also featured on Mod Sun‘s forthcoming single “Stay Away,” set for release later this month on April 24. Machine Gun Kelly is also featured on the song.
Related Link