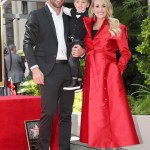 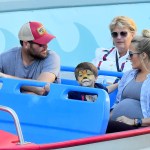 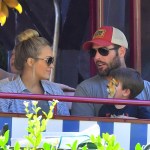 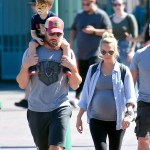 Carrie Underwood and her husband Mike Fisher are having so much fun while quarantined with their two young boys — Mike even used the kids as a bench press!

Carrie Underwood, 37, has a lot on her plate with two young kids at home during quarantine — but the country music singer has her hockey player husband Mike Fisher, 39, on deck to help out! In an adorable photo posted to her Instagram page on April 16, the “Before He Cheats” singer gave fans a glimpse inside her family life, which involves her hubby using their two young sons Isaiah, 5, and Jacob, 1, as workout weights! “Mornings at the Fisher house,” she captioned the cute snap with two airplane emojis.

The pic showed Mike in grey sweats, holding the couple’s two sons above his head — one in each of his hands! While Isaiah rocked a red tee and colorful PJ pants, baby Jacob was totally twinning with his dad in grey sweatpants and a navy blue top. “This is the best time of your life, I would give anything if my children were this small again,” one fan commented on Carrie’s post, while another wrote, “It’s called bench pressing the babies!” Looks like a tough workout!

When she isn’t kept busy by work, or her adorable kids, Carrie has been making time to workout. She posted a gorgeous outdoor selfie to her Instagram story on Saturday, April 11, which she captioned, “@fit52 was tough this AM, but I made it with the help of the pause button!!!” she wrote over the adorable pic, referencing her fitness app. The blonde beauty added a laughing emoji and tagged her trendy fitness apparel line Calia by Carrie.

Carrie looked so gorgeous in the makeup free selfie as she showed off her flawless skin and complexion! She hilariously stuck out her tongue — perhaps at the mornings’ tough workout — as she kept her blonde hair in two low ponytails. The photo was seemingly taken near her Nashville, Tennessee — where temperatures are sunny and in the 60s, perfect for a little morning exercise routine. She opted for a black scoop necked t-shirt and the Women’s Energize Leggings in the turquoise “G2 Blue” from her Calia by Carrie line, which she originally released in 2015.