It started off so innocently. While chatting with Variety, The Weeknd said that his 2011 mixtape House of Balloons was a gamechanger, so much that even Usher channeled this new brand of dark, sophisticated R&B on his song “Climax.” Many fans went a bit overboard and said that The Weeknd (Abel Tesfaye, 30) was pulling a “Soulja Boy accuses Drake of ‘stealing my whole f-cking flow’ ” move. In response to the allegations of shade, Abel defended himself by posting a tweet from Diplo — the man who produced “Climax” — to his Instagram Story on Thursday (Apr. 9). “The production on ‘Climax’ lends itself to House of Balloon era The Weeknd.”

“When I heard those early records, they blew my mind – soulful in their silences, and a spacey iconic voice that felt uniquely Internet. The idea of R&B having dark edges was what I wanted to bring to Usher,” added Diplo. If having the man who produced the song own to how House of Balloons was an influence wasn’t enough, The Weeknd shut down any talk of beef or shade. “Of course, [the] media blows things out of proportion and takes things out of context. Usher is a king and always an inspiration. So, it was flattering to hear what him and Diplo did on [‘Climax’] XO.” He even tweeted the message, ensuring that everyone saw it.

So, what was the quote that got The Weeknd in hot water? “I heard ‘Climax,’ that [2012] Usher song, and was like, ‘Holy f—, that’s a Weeknd song.’ It was very flattering, and I knew I was doing something right, but I also got angry. But the older I got, I realized it’s a good thing,” he said. Diplo’s tweet confirms these suspicions, but Usher let his feelings be known – sorta. “Have you ever seen the moon bark back at the dog?” he tweeted after the Variety piece ran, a message many took as a clap back at Abel. 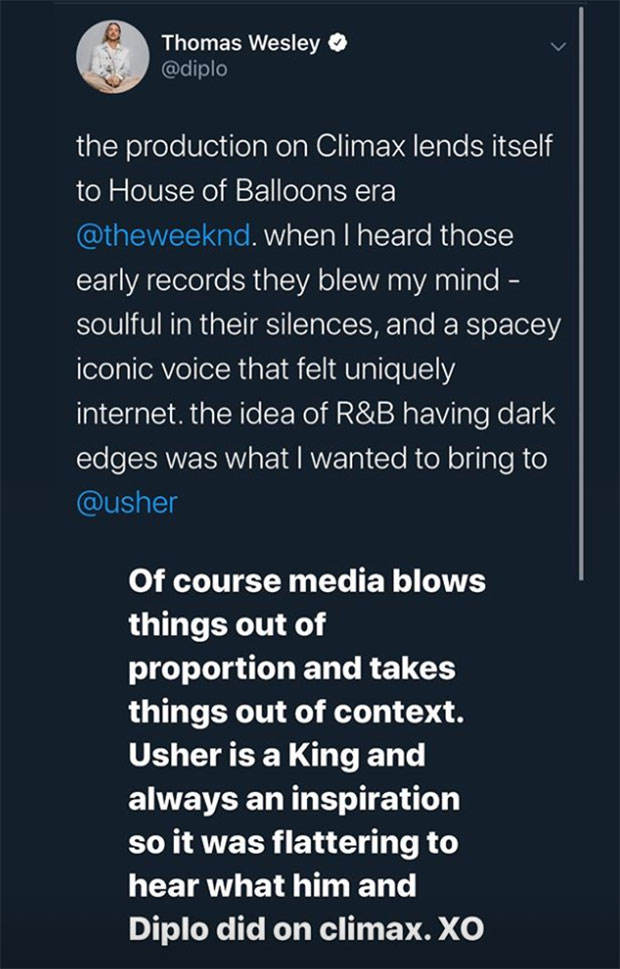 On top of that, one of Usher’s collaborators, Eric Bellinger, started the #ClimaxChallenge. This wholly G-rated viral event, as unpacked by Stereogum, challenges people to sing the falsetto notes on Usher’s “Climax.” Eric (who worked with Usher but not on “Climax) insinuates that Abel can’t hit those notes, and since The Weeknd can’t sing it, then it can’t be a “Weeknd Song.” On Usher’s Instagram Story, he posted a few videos of him listening to different #ClimaxChallenge attempts. He also shared a video of him nailing his own song.

Plus, contrary to Diplo’s claims, Ariel Rechtshaid (another “Climax” co-writer) tweeted, “With the utmost respect to all parties involved.  climax was inspired in the room without any subconscious or conscious outside influence.”