Not even the COVID-19 pandemic can keep down some drama. Apparently lockdown has created a possible situation at home for Cardi B, 27, with husband Offset, 28. Her enemy, Love & Hip Hop NY‘s Rah Ali, 36, tweeted to the rap superstar to tell her, “Get off twitter sneak dissing, your husband in the other room on that video game, texting h*es again.” Cardi fired back in a since-deleted tweet, “NOBODY IS SNEAK DISSING I’M TALKING ABOUT YOU. Let’s not talk about husbands cause I will put your whole situation on blast. I dm you if you wanna deal sh*t like women! dc what you post about me. DON’T POST LIES. That’s not how you brand.” Which seemed to trace back to another deleted tweet where Cardi wrote, “I understand b*tches don’t like me but to put a whole fake tweet about me trying to start sh*t.”

That just set off Rah all the more. “Ouu baby let’s do it. Your lame friend already ATTEMPTED that, my union is SOLID. So please give it your best shot, so I can make a complete mockery out of you,” Rah responded.  Cardi in another since deleted tweet clapped back, “You sure you wanna test it? Cause I got receipts of you and so and so in the ATL? Anyways like I said I dm you if you wanna settle it like a woman. If you haven’t write back so are you just doing this for attention? DONT GIVE A F*CK if you post about me JUST DON’T POST LIES!

Rah took her up, tweeting back, “Yes I’m POSITIVE. I want to test it out. I’m from the show me state. Let’s go.” Rah is happily married but has never named her husband to keep him out of the public sphere. However she did share a Happy Wedding Anniversary IG post on July 27, 2018 where she shared a pic of him kissing her on the forehead on the beach and wrote: “You are an honorable man. One of principle and character that can never be questioned. When I stand beside you and hear you speak, I feel honored. Words can’t begin to express my gratitude and appreciation for you being an amazing man and provider each and every day. Thank you for all that you do. I couldn’t have asked for a better partner in life.” 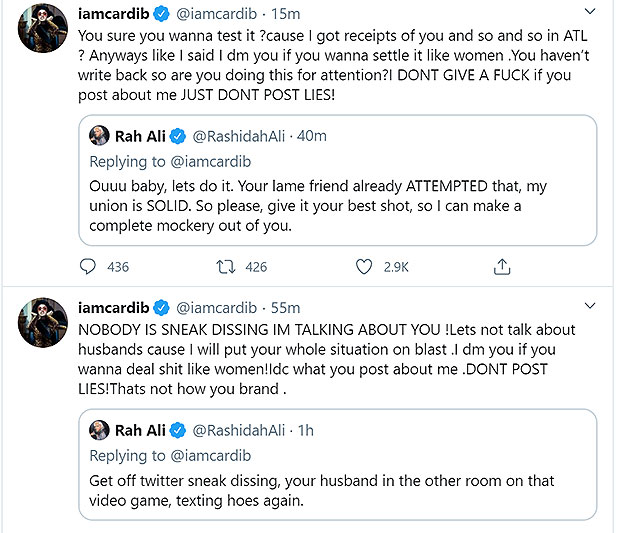 So it appears Cardi got mad about a fake tweet, claimed it traced back to Rah, and then the two got into it over their husbands. Cardi appears to be over it or has taken it to DM only. Now the most recent tweet on her page is from Apr. 7 where the RIAA congratulated her for her debut 2017 single “Bodak Yellow” going 9x platinum and “I Like It” being certified 8x platinum. That’s 36 million singles sold. And her album Invasion of Privacy being certified triple platinum. Let your success do the talking Cardi! She wrote “Thank you RIAA” next to their post about her achievements.