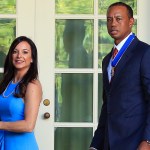 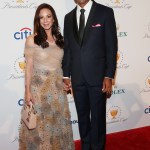 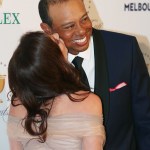 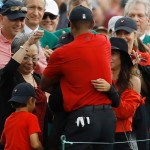 Tiger Woods shared a glimpse of his happy life with his girlfriend Erica Herman and his kids Sam, 12, and Charlie, 11, when he posted a smiling pic of them all posing at a ‘Masters Champions Dinner’.

Tiger Woods, 44, made sure to be enjoying time with his family while in quarantine on Apr. 7. The professional golfer posted a photo that showed him smiling big while posing at an outside table with his girlfriend Erica Herman, 34, and two kids Sam,12, and Charlie, 11 during a sweet dinner. “Masters Champions Dinner quarantine style. Nothing better than being with family,” he captioned the pic. In the cute snapshot, Charlie can also be seen holding an adorable dog.

Once Tiger posted the pic, it didn’t take long for his followers to comment. “What’s the menu?” one follower asked while another wrote, “Looking good in green!” referring to Tiger’s green blazer. “You are and always will be the GOAT,” another complimented and a fourth sent heart emojis. Others also shared the same sentiment about the GOAT comment by sending multiple goat emojis.

Tiger’s recent family pic is a rare one considering he doesn’t often post personal pics with those closest to him. His kids, who he shares with ex Elin Nordegren, 40, are sometimes seen at his tournaments however, including last Apr. when Tiger won his first Masters in 14 years. The enthusiastic athlete was spotted sharing a memorable hug with Charlie after the tournament ended and it was clear to see that his kids were the most important to him in that moment.

Masters Champions Dinner quarantine style. Nothing better than being with family.

We’re glad Tiger is using his quarantine time to focus on his family and enjoy a delicious meal at the same time! We’ll be on the lookout to see if he decides to share any more special times in the near future.