Season 10 of The Real Housewives of Beverly Hills is just days away and the taglines are in! Kyle Richards, Erika Girardi (aka, Erika Jayne), Lisa Rinna, Dorit Kemsley, Teddi Mellencamp and Denise Richards, along with newcomer, actress Garcelle Beauvais offered up a quippy statement to describe themselves this coming season, which premieres Wednesday, April 15 at 8 pm on Bravo. And, if there’s anything we took away from the one-liners, it’s that RHOBH fans are in for endless drama, secrets, surprises and more of Rinna’s dancing.

Kyle left us on a cliffhanger, foreshadowing that some women may have some skeletons in their multi-million dollar closets. “Around here, there’s more than just dresses in everyone’s closet,” her season 10 tagline reads. The always fabulous Erika Jayne let fans know she’s always (Broadway) ready, assuring, “Break a leg? Not in these heels, honey!”

Meanwhile, Rinna stayed true to her brand. “The secret to life? Dance like everyone is watching.” It’s very possible we’ll get some sort of dance routine out of her this season. Dorit, who’s got a lot on her plate from a business perspective, is in it to win it this coming season. “I won’t settle for anything less than everything,” her tagline says. 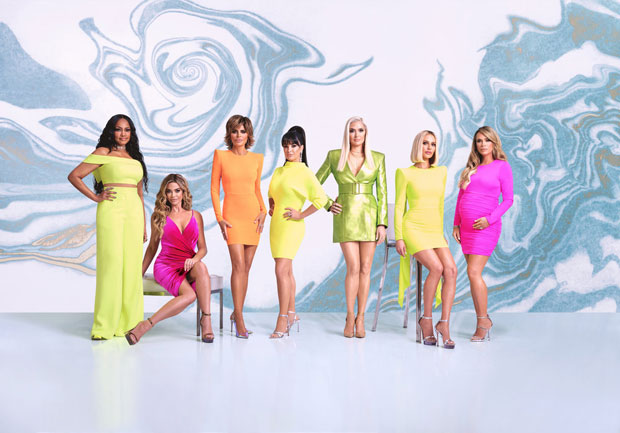 To Teddi, who played up her pregnancy in her season 10 intro. “You never know what to expect… when I’m expecting,” she teases. Teddi was pregnant while filming season 10, as well as when the show’s new portraits were shot. The proud mom welcomed her third child, a daughter, on February 25, she revealed on Instagram.

Then there’s Denise, who is confident that she’ll get her way, no matter what the circumstance may be. “My life may not be a fairy tale, but I’ll always get a happy ending,” she says in her tagline, seemingly hinting at the pent up drama about her alleged affair with Brandi Glanville. Brandi, a former full-time Beverly Hills housewife, will return in a friend capacitythis season, as well as Camille Grammer.

Last but certainly not least is Garcelle Beauvais. The actress pulled a page out of her script, when it came to creating her tagline: “Life is an audition and, honey, I’m getting that part.”

The Real Housewives of Beverly Hills returns Wednesday, April 15 at 8 pm on Bravo. For all of the latest news and recaps, check back at HollywoodLife!