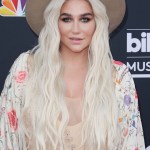 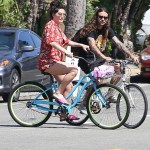 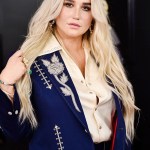 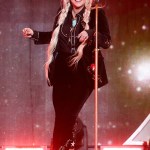 Kesha was the original ‘Tik Tok’ singer with her first hit by that name in 2009. Now she’s using the app to perform her classic ‘Take It Off’ to a sexy dance, while fans love that she did it via TikTok.

The coronavirus lock down is causing plenty of singers to put on some amazing mini-performances via Instagram and other sources. Kesha is now joining the club. She broke through in 2009 with her first major hit “Tik Tok.” Fans are now going wild that she’s using the app service by the same name to perform a sexy dance routine to her own 2010 smash “Take It Off,” by using TikTok. The only thing better is if she’d performed “Tik Tok,” on TikTok!

The 33-year-old wrote in the caption, “If u bored like me just Take it off 👻👻👻.” She looked just as amazing as she did when she dropped the song a decade ago. In the video, she wears a black leather jacket with fringe accents. Its matches her nearly jet-black hair perfectly. She initially starts by stripping it off her shoulder while looking behind at the camera. Then Kesha turns around and does a sexy dance routine for her chorus that’s far more intense that her 2010 music video.

Fans went wild when she shared it to her Instagram on April 1. User natevigeant wrote, “The real queen of tik tok,” while major___robinson added, “LITERALLY INVENTED TIKTOK.” beccaonthefritz predicted, ‘watching this blow up on tiktok in 3…2….1 😂💚⚡️.” Kesha already did a TikTok video to her 2010 song “Cannibal” and the dance she performed has been copied endlessly by her animals.

Kesha just announced on March 31 that she was postponing the rest of her tour due coronavirus concerns and safe distancing. “Animals, I have to accept the current situation and postpone my High Road tour,” she wrote in an Instagram post. “I’m sorry :( I take an enormous amount of pride in making my shows a safe place for anyone no matter what, so with that in mind, my team is working hard to reschedule my tour for later in the year.  Hold on to your tickets as they will be honored at the new shows and keep an eye on  www.bitchimblessed.com for more information on the new dates, to be announced soon.”

She added, “Y’all know that my live show is my absolute favorite part of making music, creating wild, beautiful memories and singing, dancing, crying and losing my mind onstage with all of u.  I’m sad that I wont see you as soon as I had hoped, but it’s more important that we all keep each other safe. I love u all and hope u all stay healthy and well. 💝🌈💝 In the meantime I’ll share as many happy stupid pictures and videos that will hopefully be mildly entertaining.” She did just that with her “Take It Off” TikTok video.