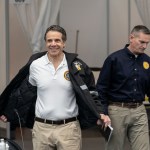 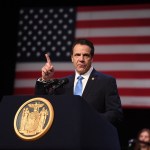 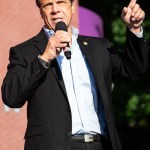 Andrew Cuomo often makes the news circuit for being the governor of New York, which has become the epicenter of the U.S. coronavirus outbreak. But on March 37, he didn’t cause a commotion online for making another announcement about the deadly COVID-19 disease. Instead, everyone was talking about the 62-year-old politician because they now suspect he has nipple piercings.

“Really didn’t expect ‘Andrew Cuomo’s nipples’ to become a trending topic during the pandemic,” one Twitter user wrote. This reflected the sentiments of many after seeing bulges through the nipple areas of the governor’s T-shirt as he sat down for a press conference to thank National Guard members for their help amid the health crisis in NYC on March 27. This soon led to a debate among the public: could New York’s governor of nine years really have been hiding nipple piercings this whole time?

“Look at these photos. Does Governor Andrew Cuomo have his nipples pierced?” tweeted Steve Mason, an ESPN radio host. Curiosity burned throughout Twitter. Another fan asked, “@andrewcuomo IS IT TRU are your nipples bedazzled ????” A third user had another burning question: “@NYGovCuomo president Cuomo .. I mean Gov. Cuomo are your nipple pierced ?.. I know this a serious time n America but if they r u broughtto my day.” It looks like the governor will need to have another press conference to address NippleGate!

The conversation surrounding the New York governor’s nipples intensified on Reddit, where people had other theories to explain the piercing-like silhouttes. “Looks like he’s wearing suspenders under his shirt,” wrote a NippleGate detective in one thread. Others in a different thread suspected “nipple hair,” or “an earpiece or microphone under his shirt.”

@NYGovCuomo president Cuomo .. I mean Gov. Cuomo are your nipple pierced ?.. I know this a serious time n America but if they r u brought 🌞 to my day

Regardless of whether or not Gov. Cuomo is sporting nipple piercings, what really matters is his devotion to fighting the coronavirus and its devastating impact on New York. The virus has even reached the governor’s family. On March 31, his little brother, 49-year-old CNN anchor Chris Cuomo, revealed that he tested positive for the new coronavirus.