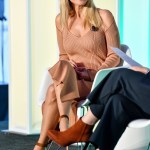 Christie Brinkley may be quarantined, but she still looks fabulous! The 66-year-old posted a pic of herself running on the beach with her two adorable pups.

Christie Brinkley is self-isolating with her two personal trainers: her pups Daisy and Chester. The 66-year-old took to Instagram on March 28 to share a series of snaps of herself running along the beach with her dogs, amid the global coronavirus outbreak. “Getting some exercise on an empty stretch of the beach with my personal trainers @daisythedukes and #chesterbrinkley,” the blonde beauty captioned the carousel post. Christie rocked black tights and an oversized blue hoodie with white sneakers as she smiled radiantly and allowed her blonde locks to blow effortlessly in the wind.

Fans loved seeing Christie getting outdoors amid quarantining. “Love your always positive attitude! You are such an inspiration,” one fan commented, while another wrote, “You look so beautiful Christie. You are just GLOWING! I hope you are staying safe.” Nevertheless, some followers criticized Christie for hitting the beach amid a global pandemic. “Our LA beaches are empty as it’s a city mandate to stay away,” one person wrote, referring to a new ruling that all LA county beaches would close, in an effort to curb the spread of coronavirus.

Los Angeles is among the U.S. cities hit hardest by the outbreak. Despite President Donald Trump suggesting the country could go back to normal by Easter, Dr. Mehmet Oz revealed he didn’t think that would be possible. “I think it’s unlikely that most of the country will be ready on Easter. It’s possible that some parts might, we need to have a national debate about whether we want to try to let some of the country come back to work and keep the rest of the country out,” he said in an exclusive interview with HollywoodLife. “There’s no way in New York, Los Angeles, the major urban areas that have been hit hard, like Seattle, are going to be able to come back by Easter.”

Getting some exercise on an empty stretch of the beach with my personal trainers @daisythedukes and #chesterbrinkley PS Our beaches and parks in the Hampton’s still remain open. But a new article came out today in the LATimes regarding the #caronavirus in sea spray! Please google if you’re a beach lover like me! Be informed !

He continued, “I’d say a great day for resurrection, but it won’t be possible for some of the major areas, especially where I am in New York City, the epicenter of this pandemic in this country. It’s impossible.” Dr. Oz revealed that at this point, he is most concerned about the health and safety of America’s healthcare providers. “If they get sick, we all go down and that’s the weak link in the system,” he explained.