With vocals as seductive to the lyrics of the song she just dropped, UPSAHL is getting in the mood, isolation be damned. The alluring alternative-pop singer shared “12345SEX” on Mar. 27, a providing the soundtrack to your next night out at the club (when we’re allowed to safely go there again.) With provocative lyrics that capture a carefree spirit, paired with a deep groove that makes the body want to move “12345SEX” proves why UPSAHL is the one all those cool people you follow on Instagram are blasting.

The new song continues UPSAHL’s upward momentum. Previously, she released “Smile For The Camera,” an Alternative Radio Top 40 hit. YouTube dubbed her an “Artist On The Rise,” and many publications recognized that she was the next big superstar int he making. She’s been on, as NYLON claimed, her “rock star ish” since she was a teenager. The Phoenix, Arizona native started writing and releasing music back when she was 17.

“Growing up, my dad was playing in punk bands and stuff from the time he was in high school until I was born,” she said when visiting HollywoodLife in 2019. “So, I was kind of surrounded by music. We had a band room in the house, and whenever bands would be going on tour, and they would stop through Phoenix and would crash in my living room. I was practically born into it.” After graduating from the Arizona School for the Arts, she dropped numerous tracks that are likely in all your friends’ indie-pop playlists: “Can You Hear Me Now,” “Kiss Me Now,” “Rough,”” and “Drugs.” 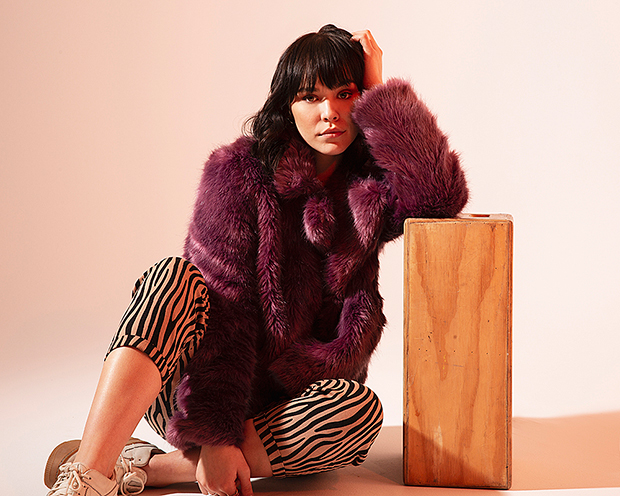 Since signing with Arista, her star has only risen higher. Before “12345SEX,” the singer teamed up with Two Feet to release a new version of her single “Drugs.” The original track racked up more than 15 million streams across digital platforms, including TikTok. The song has been used on more than 200,000 videos. She also co-wrote Dua Lipa’s song, “Good In Bed,” a track off her Future Nostalgia album that’s also out today.

Before the world went crazy, UPSAHL was set to support Christian French on his Bright Side of the Moon Tour. She was also supposed to collaborate on Two Feet’s Pink Tour: Part 1. However, that was before all shows in the US were postponed. With new dates to be announced soon, keep your eyes out for this one to watch.