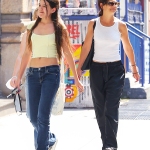 Katie Holmes had her luggage ready on a curbside in NYC, looking as though she’s leaving town with Suri Cruise! The photos were snapped on the same day 519 coronavirus-related deaths in New York were reported.

Fleeing to safer grounds? With latex gloves on, Katie Holmes, 41, was pictured rolling a luggage bag on the side of a New York City street on March 27. This didn’t look like a casual outing. A rolling cart stacked with bags was also pictured by the Dawson’s Creek star’s side as she made her way to an SUV, while Suri Cruise, 13, had their two dogs on leashes. No one and nothing was left behind, as you can see in these pictures!

It’s unclear if Katie and Suri were actually leaving town, but it’s easy to see why someone wouldn’t want to stay in the Big Apple — or the state in general. New York is now the epicenter of the United States’ coronavirus outbreak, with over 44,000 reported cases of COVID-19. There are more than 100,000 cases nationwide, for context.

On Friday — the same day Katie and Suri were pictured with their bags and dogs — New York Governor Andrew Cuomo revealed that the “deadly virus” has now cost the lives of 519 people in the state. That was an alarming update, considering the death toll was at 385 deaths the day prior. NYC has even begun setting up makeshift morgues outside its hospitals, the first time the city has done so since the 9/11 terrorist attacks in 2001.

Katie and Suri were also photographed out and about in NYC on March 19. That time, no luggage was present as the mom and daughter duo walked their two dogs in Manhattan’s Central Park. Three days before that, Katie was even seen strolling outside in sweats (that time, without Suri by her side) amid the coronavirus pandemic. It’s clear that Katie and Suri are always ready to be on the move!