Jennifer Garner and her daughters are getting their steps in despite being in quarantine due to COVID-19. The actress and her girls, Violet, 14, and Seraphina, 11, enjoyed a sunny California day and some much needed fresh air on Monday, March 23. The trio chatted together while they walked along the beach.

Jennifer donned a white sweatshirt, black leggings and a blue baseball cap for her mommy-daughters day. Violet, who sported a pair of glasses, appeared to have a black dress on underneath a dark colored sweater. And, Seraphina wore black sweatpants and a grey tee with a sweatshirt tied around her waist.

Jennifer’s 8-year-old son Samuel, was not present during the stroll. Neither was Jen’s ex-husband, Ben Affleck, who she’s often spotted on family outings with. Ben and Jen, who separated in 2015 after 10 years of marriage, finalized their divorce in October 2018. They’ve remained close friends, as Jen has helped Ben focus on his sobriety. 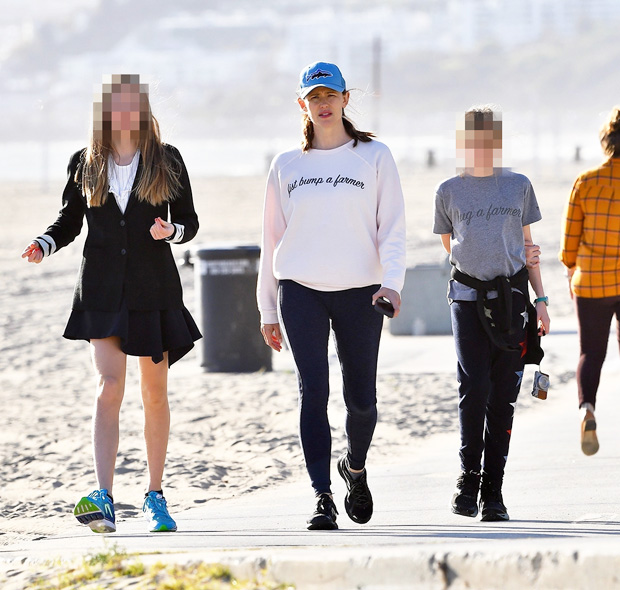 Jen stepped out for a girls day after she told Jimmy Fallon that she and her kids are a “tough team” during self-isolation amid the ongoing global health crisis.

“I think I have the perfect age kids for this because they’re big enough to understand and to have the conversations,” she explained on Friday during a video chat with the late night host, who is continuing The Tonight Show in an At Home Edition video series.

“Like, we’re built for challenge, we can do this, we’re a tough team,” Jennifer said. “Let’s learn about a vacuum cleaner. But they’re not so big that they’re just like, ‘Well I don’t care. I’m going to go.’”