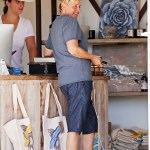 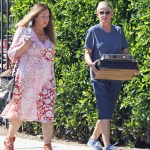 Quarantine is so BORING – just ask Ellen DeGeneres. While struggling with cabin fever, she desperately called up her friends like Justin Timberlake and Adam Levin to ask, ‘what you doin’?’

“Justin,” said a very bored Ellen DeGeneres during a Mar. 18 phone call. “Ellen,” replied Justin Timberlake, curious as to why a very bored Ellen, 62, was calling him and his wife, Jessica Biel. “Whatcha doing?” asked the very bored Ellen, struggling to find something to do during her coronavirus-based isolation. As Ellen and Justin, 39, were talking, Jessica, 38, chimed in to say, “Hey.” Sadly, both of them were doing “nothing,” just like the very bored Ellen. “Alright. Well, I’ll talk to you later,” she said. Justin said that Ellen should “call him in an hour,” but from the next video that the Ellen DeGeneres Show host uploaded to her Instagram, it seems she called John Legend next.

“John!” the bored Ellen said when the 41-year-old crooner picked up the phone. “What’s going on?” When John said that “nothing much” was happening on his end, he brought in his wife, Chrissy Teigen. “Hey, Chrissy. What’s going on?” Ellen said to Chrissy, 34, who also noted that “nothing” was up. “Say ‘Hi,’ Miles,” the Bring The Funny host said to her son, 1-year-old Miles. “Hi, Miles,” said Ellen. “So, you have kids. I wish I had kids right now. I’m so bored.”

“We’re bored too,” Chrissy added, and her daughter, Luna, 3, was heard in the background. “Alright. Well, I just wanted to call and say ‘hey,’” the still very-bored Ellen said. “Thank you for thinking of us!” added Chrissy. “Bye! Say hi to Portia [de Rossi]!” After Ellen posted both of these unsuccessful phone calls to her social accounts, Chrissy shared one. “Ellen does not know how to do nothing, and it’s still pretty early in the isolation game.”

Great catch-up with my friend @JustinTimberlake and his wife @JessicaBiel.

Sounds like things are good over at @JohnLegend and @ChrissyTeigen’s house.

Ellen also gave Adam Levine a call since March 18th was his birthday. “Whatya doing?” asked Ellen after wishing the Maroon 5 singer a Happy Birthday. “Just sitting here, enjoying my wonderful family.” “Oh, that’s lovely,” she said. It was a short call since both of them were doing “nothing.” It seems that Ellen just can’t get a break from the doldrums of isolation.

Sadly, Ellen can’t rely on her job to save her from her boredom. The Ellen DeGeneres Show opted to suspend production during the ongoing coronavirus outbreak, per Deadline. “Hey there. Me again. So, after some more thought, we have decided to suspend production completely until March 30th. We just want to take every precaution to ensure that we do our part to keep everyone healthy. I love you guys, and can’t wait to come back. I’m already bored.” The move comes a day after Ellen producers announced the show would continue to tape without an audience.