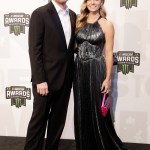 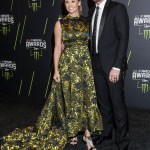 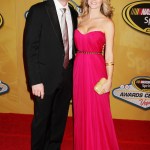 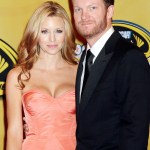 Congratulations! Dale Earnhardt Jr.’s wife enlisted their precious daughter Isla to tell everyone she’s going to be a ‘sister,’ and the news of this pregnancy is so fantastic, even Junior couldn’t believe it when he found out.

“I’m gonna be a sister!” Isla Rose Earnhardt says in the video that her mother, Amy Earnhardt (née Reimann), 37, posted on Mar. 18. Actually, the soon-to-be-two-year-old daughter of Amy and Dale Earnhardt Jr. said she “gonbabeaseester,” but she got the point across. Dale, 45, and Amy are about to add another child seat to their family car, and it seems Isla (who turns 2 on April 30) can’t wait to become a big sister. The news is so incredible – especially in this time of political turmoil and coronavirus panic – that even Junior didn’t believe it when he realized he was going to become a daddy again.

“This is how Dad reacted when I told him a few weeks ago,” Amy captioned a second video. In the clip, a clean-shaven Junior walks into the living room to look at his daughter’s t-shirt. “‘Super Amazing Sister,'” he reads out loud. It takes a second for him to realize what that means. “How do you know it’s a girl?” he asks his wife, before being reminded that Isla is going to “beaseester” no matter the gender of their unborn child. Dale Jr.’s fellow racer Clint Bowyer even made fun of the remark in the comments, which – really, Jr. earned that one.

The comment sections on both videos were soon flooded with positive messages. “Another Earnhardt! 🙌🎉 congratulations!!” the official Nascar Instagram account said. “Congratulations!! So happy for you, Dale and Isla!” wrote Ashley Busch, wife of racer Kurt Busch. Along with Clint’s razzing, Bubba Wallace wrote “Bahahahahaha!!!!!!, while Brad Arnold of 3 Doors Down added “Congratulations!!!” “This makes me so happy,” added ESPN journalist Marty Smith. “Congrats, guys!

The birth of Isla profoundly changed the life of NASCAR’s most popular icon. “Every time I look at Isla, I want to cry. Every time I look at Amy and her together – when Amy’s holding her or feeding her – I just can’t believe this is in my life,” Dale Jr. said about a week after his baby girl was born, according to For The Win. Dale’s life has been mostly about family since he retired from racing full-time in 2017. However, he’s made a few returns to the track since then, his most recent appearance at the August 2019 race at Darlington.

Isla got to see her daddy race one time, although she was only five months old when he got behind the wheel in 2018. “I was thrilled to have Isla there,” Dale said, via the Associated Press. “She won’t remember what happened today, but if I never run another race, I got to have her at one event, and we got a picture at the car before the race that she’ll be able to have the rest of her life. It doesn’t matter to me if she ever thinks that’s a big deal, but I want her to have some understanding, I guess, of what I did before she was born.”