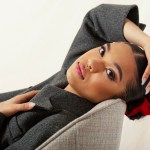 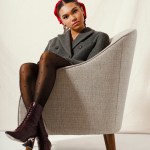 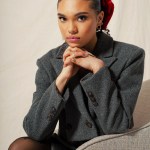 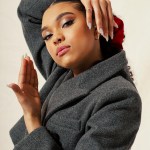 Sofia Bryant is the breakout star of Netflix’s ‘I Am Not Okay With This.’ The actress spoke EXCLUSIVELY with HL about Dina and Sydney’s complex relationship, the finale, and how Dina would feel about Syd’s powers.

Sofia Bryant was just as shocked as the rest of us when she read the I Am Not Okay With This season finale script. Her character, Dina, is right there when Sydney (Sophia Lillis) makes Brad’s head explode at the dance. Dina is left covered in blood and falls to the floor as she looks at her former boyfriend, who is now headless. “It’s so interesting because I have such a different reaction to watching it and actually shooting it and reading it and everything, as did most of the cast. I remember watching it and I actually felt nauseous because it’s shocking,” Sofia told HollywoodLife. “It’s also really cool. It was done so well. Literally, the way it was written in the script was like, ‘Brad’s f**king head explodes.’ That’s what it said. We were reading through it and we all kind of just took a pause. We stared at each other, especially because we hadn’t shot anything yet. It was during the readthrough when we all first read it together, so we all kind of had our own image of it in our heads, and we were all kind of like, ‘Did you just see what I saw?'”

Just before Brad’s head explodes, he outs Sydney in front of the entire school after reading her diary. He dies just before he can reveal that Sydney has superpowers. Sydney struggled to come to terms with her newfound powers over the course of the season and still doesn’t know the extent of her powers. Stanley (Wyatt Oleff) is the only one who knows about them. Dina has no idea what Sydney has been going through. Even if Sydney didn’t mean to kill Brad (Richard Ellis), Sofia discussed whether or not she thinks Dina will be able to forgive Sydney for what happened.

“So for me, I try to think of this in a way where if I really was Dina,” Sofia continued. “Dina and I, we are very alike, but I feel like they are very key things that are different with us. I think that if I had to deal with that I know I would have some trust issues. The whole season Dina knows nothing and that’s her best friend. It’s also her being kind of distant about Brad and everything, but she doesn’t ever find out in the first season about Syd’s powers. So she’s kind of finally being honest with Syd about their feelings for each other and everything and now her boyfriend just died literally onto her face. She doesn’t know that it’s because of her best friend, who she’s also kind of falling for. I would just have really hard trust issues. It’s forever complicated. And there’s a question now that Dina can ask: did she do it because she’s jealous?”

Sofia is certain that Dina will be upset if (more like when) she finds out that Stanley has known about Sydney’s powers for so long. “I know I would be upset,” Sofia noted. However, she said she would “understand because Dina was really distant in the beginning because she was so infatuated with Brad, but I think that she would be a little bit hurt because that’s a huge thing.”

The actress also thinks Dina would be “supportive” of Sydney’s superpowers. “Sydney is really kind of struggling to deal with them. It’s not like this thing that she’s honing and she’s super comfortable with yet,” Sofia said. “She kind of almost wants to get rid of them herself. I think that Dina would immediately see that. Her superpowers are also a metaphor for her growing up and having new things to deal with. I think she would have been very, very helpful and caring and try her best to understand this new thing.”

One of the most poignant scenes of the first season is when Sydney kisses Dina in a bedroom at a house party. Sydney, who is normally so closed off, finally shows her feelings for Dina. In the finale, Dina admits to Sydney that she didn’t hate their kiss at all. Sofia opened up about this game-changing moment in Sydney and Dina’s relationship. “I’m really proud of that scene and being able to more closely and accurately represent. I know that, even when we were on set, the tone and the air in the room at that moment was just so honest,” Sofia told HollywoodLife.

Sofia doesn’t know where Sydney and Dina’s relationship goes from the finale, but there is a lot to dive into in a potential second season. “I definitely think that Dina has a lot to explore now and I think that she’s kind of learned this new thing about her and she can kind of approach and have a new way of thinking,” Sofia continued. “It’s hard because I keep thinking of her and Syd and where they’re going to go from here because it’s really left so open. I really just wish the best for them both.” But does she want to see them together? “I mean, I would,” Sofia revealed. “I love their dynamic, but it is really hard because it’s so complicated.”

Season 2 hasn’t been confirmed yet, but Sofia has some ideas about what she’d like to see go down. Dina and Stanley don’t get to know each other that well in the first season, and Sofia would love to explore a potential friendship between them. “It’s so funny because I love Wyatt [Oleff] so much, but we didn’t have a lot of stuff this season together. We were actually talking and it would be really cool to kind of explore their friendship because, when you think about it, they’re the two people who are closest to Syd. The next person to find out about her powers would realistically be Dina, so it would be really interesting to kind of see how they would connect and kind of have each other’s backs because that’s a lot to deal with.” I Am Not Okay With This season 1 is currently streaming on Netflix.