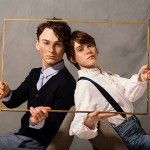 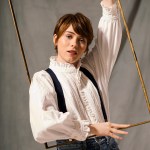 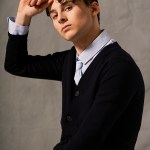 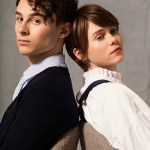 The world has fallen in love with Sydney and Stanley from ‘I Am Not Okay With This.’ HL spoke with Sophia Lillis and Wyatt Oleff about their reaction to the mind-blowing finale and all things season 1.

I Am Not Okay With This has become Netflix’s newest sensation. Sophia Lillis and Wyatt Oleff star as Sydney and Stanley, two teenagers who form a close friendship while trying to make it through high school in their small town. Sydney isn’t just facing everyday teenage life — she’s also dealing with newfound superpowers that she has no idea how to control, as well as her burgeoning sexuality. From dealing with feelings toward her best friends to coming to terms with her dad’s death, the pressure is on for Sydney. Everything comes to a head (no pun intended) in the season finale when Brad, Dina’s on-again, off-again boyfriend, confronts Sydney about everything she wrote in her diary at the school dance. Brad cruelly outs Sydney and is about to reveal her superpowers when his head explodes EVERYWHERE.

For Sophia, she thinks the literally mind-blowing moment was the “perfect way” to end the first season. However, Wyatt definitely didn’t see the Brad twist coming. “I’m expecting him to have some sort of redemption arc, something along those lines,” Wyatt says. “And then all of a sudden it’s just ‘boom’ and that’s it. It’s like built up and you can kind of see it coming but you can’t.”

As soon as Brad’s head explodes, leaving pretty much everyone around him covered in blood, the dance descends into chaos. Stanley’s already on the floor after Brad punched him when he tried to defend Sydney. “I think he obviously knows who did it because how else would that happen? He sees it but then he gets distracted by Sydney’s notebook, which disappears into the crowd,” Wyatt says about what Stanley’s thinking in that moment. “I think he’s got a lot to think about. Poor him.”

Sophia hopes that Sydney will forgive herself for what happened to Brad. “She knows deep down it’s her powers that she can’t control. It’s not her willingly wanting to kill him,” she continues.

The season 1 finale leaves I Am Not Okay With This wide open for a second season. Wyatt believes Stanley will go to great lengths to protect Sydney. “With all they’ve been through, I think Stanley would do most anything to make sure that she stays safe, especially keeping her secret,” Wyatt tells HollywoodLife. “I think that’s like one of the things that makes their connection so special. He knows her secret, and he’ll do anything to keep it that way.”

The episode ends with Sydney running away from the school and coming face-to-face with the shadowy figure that’s been following her. When Sydney asks whether or not she should be afraid, the man says, “They should be afraid.” Sophia admits she has no idea who the man is but Wyatt has a theory. “It’s Stanley from the future,” he reveals. Honestly, it’s not a bad theory.

There’s still so much to explore with all the characters. Wyatt wants to see the layers peeled back on Stanley’s relationship with his father. “I think expanding Stanley’s character in any way would be amazing,” Wyatt admits. “I feel like Stanley acts pretty consistent throughout the show, except for when he’s with his dad. I think there’s something there that is kind of hinted at but maybe not totally explored.” Stanley’s mother is never talked about, but Wyatt thinks that Stanley’s mom has a great influence on him. “My theory is that she inspired him to be the way he is,” Wyatt says.

Even though Sydney possesses superpowers, Sophia wouldn’t call her character a hero. “I don’t really consider her anything,” Sophia says. “I think that’s the real best part about it is that even though it’s being poked at that it’s a superhero show just because she has superpowers, I feel like that’s also a common trope. Once they have powers, they either become a villain or they become a hero. Either one. I feel like she’ll become neither, and I think that’s the interesting part is that throughout it all she’s just a normal high school girl no matter what she does.”