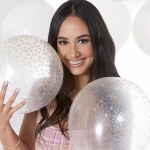 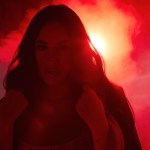 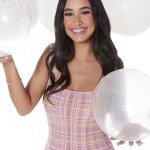 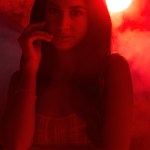 Like all of the Acosta kids, Lucia is on her own journey. HL spoke EXCLUSIVELY with ‘Party of Five’ star Emily Tosta about Lucia’s activism, her struggles, playing two very different characters, and more.

Emily Tosta is one of the stars of Freeform’s critically-acclaimed Party of Five reboot, which airs Wednesdays at 9 p.m. The lives of the Acosta children were turned upside down when their parents are suddenly deported to Mexico. This leaves Emilio, Lucia, Beto, Valentina, and baby Rafa trying to adjust to life without their parents right beside them. The headstrong and intelligent Lucia refuses to live in fear. She’s determined to make her voice heard.

HollywoodLife sat down with Emily to talk about what’s ahead for Lucia in season 1. She discussed Lucia’s ongoing struggle to adapt to her current situation and taking on being a female role model for her little sister, Valentina. Emily said that Lucia and Valentina’s relationship will get “stronger” as the season progress. She also revealed that Matthew will continue to have a “strong presence” in Lucia’s life. Read our full Q&A below.

What can you say about how Lucia’s going to continue to adapt to being an even bigger presence in Valentina and Rafa’s life?
Emily Tosta: It’s always been something that she struggles with when it comes to taking on that motherly role. She doesn’t really want to do that. She still wants to live her own life. She still wants to be a teenager because, at the end of the day, she’s 16 and there are many things that she never thought she had to do. She just got brought into this experience in her life, not having her parents and it just made her grow up so fast. But I think throughout the season you’re going to see her understand that there are certain things that you have to embrace and she can’t change her circumstances. The best thing she can do is adapt to them. It’s going to be very difficult for her because at the same time, she still wants to focus on her own things. But I think she starts learning that Val is a little girl and she doesn’t have a mom. She doesn’t have any female figure in her life. So if she has to be that person for her, she’s kind of finally taking those footsteps.

How will Lucia and Valentina’s relationship evolve as the season continues because both Beto and Emilio are grown, but Valentina is still in need of a female role model in her life.
Emily Tosta: I think their relationship is going to get stronger. There are a couple of things that happened with Val that people will be able to see throughout the season that makes Val actually a little bit reckless. It starts worrying the siblings and they’re like, “Well, maybe we should pay more attention to her. Maybe we should be more role models in her life.” So I think once some of those things happen and they start noticing differences in Val’s behavior, Lucia’s like, “Shoot, I need to do something about this.”

Lucia’s extremely driven and clearly has big dreams for herself. Will we continue to see her take active steps to pave her own path in life, amidst everything with what’s going on with her?
Emily Tosta: You definitely will. She’s going to start getting involved with activism and becomes sort of like a justice warrior, in a sense. There’s a character that comes in a couple of episodes that’s just for a perspective of what the political activism world is like. She starts getting more involved with it and she starts wanting to help others, especially other families going through immigration issues as well. She starts trying to help them and it’s cool to see her grow and take all her anger and confusion into a better, more positive outlet.

Will Matthew continue to be a part of Lucia’s life as the show moves forward?
Emily Tosta: Yes. Matthew becomes a very strong presence in Lucia’s life. Matthew actually awakens a side of Lucia’s identity that she wasn’t very okay with embracing. Matthew is that one person that she finally starts opening up to and trusting with that part of her identity.

How does Lucia inspire you?
Emily Tosta: Lucia inspires me because in the midst of all this chaos and traumatic events that are happening in her life she still, later on in this season, tries to find a way in which to help others. I think that’s something that I really end up admiring about her, that she just starts trying. Since she couldn’t help her parents, she wants to help other people. She becomes this warrior and she’s so strong and determined. She has such strong opinions since she’s not scared to voice them. I think that’s one of my favorite things about her.

Now that you’ve finished filming the season, how do you feel about Lucia’s evolution from the premiere all the way to the finale?
Emily Tosta: I love it. I think the writers did such a wonderful job of making her grow into this strong woman. Even though there’s still a couple of things about herself that she needs to learn to embrace and there are still a few things that she doesn’t feel comfortable sharing with others, which people will be able to see throughout later on in the season, I think she’s still growing so much and has become such a strong woman. She’s really taken on that role of not having her parents anymore. Even though it’s really hard for her, she’s just trying to do her best.

How does it feel going from one character like Leticia on Mayans M.C. to Lucia on Party of Five?
Emily Tosta: They are complete opposite sides of the pendulum. Leticia is this crazy, reckless girl that grew up on the streets. I don’t blame her for the way that she is because that’s all she’s known her whole life. I mean she’s only had herself and she’s grown up around surroundings that no 16-year-old girl should ever grow up in, or anybody for that matter should grow up. So I think it’s really cool that I get to play both characters. The show got picked up for season 3 so we’ll start that soon. If we get a season 2 of Party of Five, I’ll probably have to fill in both at the same time again like I did last season. It’s really interesting going from one set to the other. There were a couple of days for last season where I would do 8 hours in one and then go do 8 other hours in the other one. It’s funny because I would come all bruised up from the Mayans M.C. set with dark eyeliner to Party of Five, which is the complete opposite. I like the range that both characters have because it allows me to play around with both and it allows me to adventure and discover new things about both. They’re both equally multilayered and complex, just in their own ways. I’m happy that I get to do both characters.