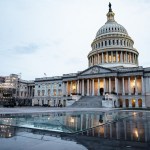 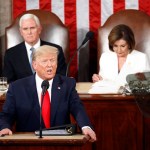 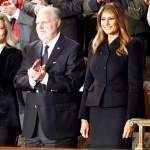 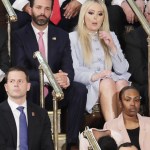 Once again, Melania Trump didn’t join in the group color theme at the State of the Union. She wore all black while the Democratic congresswomen, led by Speaker Nancy Pelosi, wore all white to pay tribute to the suffragettes.

It’s Donald Trump‘s last State of the Union of his presidency today, February 4 — and it could potentially be his last day as president, should he be convicted the next day in the Senate impeachment trial. First Lady Melania Trump, 49, certainly wasn’t dressed for a celebration, either. The FLOTUS made her entrance in a somber black Dolce & Gabbana skirt suit, but the grave color alone wasn’t the only reason Melania’s outfit attracted attention. Once again, she was wearing the exact opposite color as the Democratic congresswomen who piled into the State of the Union.

The left-wing lawmakers wore white in honor of the 100th anniversary of the 19th amendment, which finally allowed some women to vote in the United States in 1920. The 20th century suffragettes often wore white, and Speaker Nancy Pelosi doesn’t think their fight is over a century later. “Proud to join my fellow @HouseDemWomen today as we #WearWhite to show support for the ongoing fight to achieve equality for women across the country,” Nancy tweeted before Donald’s speech.

Melania’s outfit is a much talked about facet of the State of the Union each year of her husband’s presidency. During last year’s address, she sat in the gallery with her guests and Ivanka Trump, wearing a fairly conservative outfit: a navy, military-style coat dress fastened with metal buttons. Other than the decision to for some reason wear one leather glove on her left hand, it was an unremarkable outfit. Which was disappointing, considering how much fun it is to find deeper meaning in her sartorial choices.

At the 2018 State of the Union, she wore head-to-toe white…but the Democratic congresswomen weren’t paying homage to the suffragettes that year. She stood out in the House of Representatives, not for her white suit and satin blouse, but because the women of Congress made a concerted effort to wear black that night instead. It was the onset of the Time’s Up movement, just weeks after celebrity women wore black on the red carpets during awards season. While Melania’s outfit likely wasn’t a slight, it was ill-timed.