Halle Berry took her kids out for lunch and a day of shopping on February 2, as seen in new photos snapped at the Grove in LA. The actress, 53, was spotted with her daughter, Nahla, 11, and 6-year-old  son, Maceo at an outdoor shopping area. Halle carried a food container, as her kids were pictured looking at items inside the shopping area.

The Bruised actress was dressed casually in a pair of distressed jeans that were cuffed at the bottoms and a white sweater. Halle wore her hair in a bun and rocked sunnies as she carried a black leather backpack over her left shoulder. Meanwhile, Nahla stood tall in a pair of white jeans. She donned a yellow tee and black combat boots with red roses on them. The pre-teen also wore her brunette hair in two braids with a blue bandana on her head.

Maceo, who Halle shares with ex-husband Olivier Martinez, wore black sweats with matching sneakers and a red tee. Halle was married to Martinez from 2013 to 2016. She co-parents Nahla with ex Gabriel Aubry, whom she dated from 2005 to 2010, after they met on the set of a photo shoot for Versace. 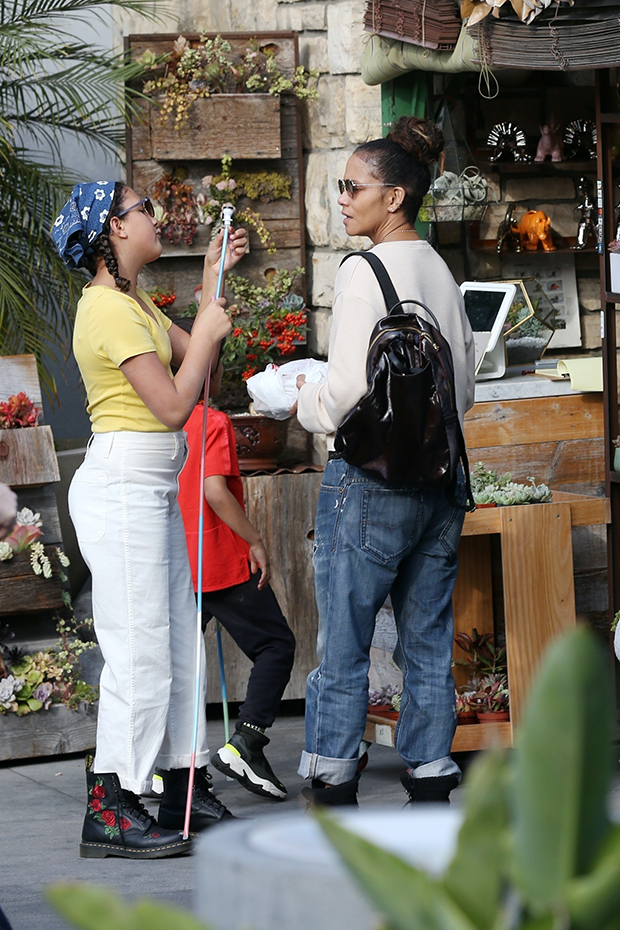 Halle, who is known for keeping her personal life private, is rarely spotted out with her kids, which makes this sighting a nice surprise. Despite still working on her new MMA-inspired film, Bruised, the actress has taken a significant step back from the spotlight in recent years. Nonetheless, she’s still very active on social media — specifically, Instagram.

Aside from her daily fitness content, Halle shared an adorable “man crush Monday” post about her son in mid-January. “THIS KID is forever my #MCM❤️,” she captioned a sweet photo of Maceo lying down outdoors with a pair of cool sunnies on.