What a doting dad! On Sunday, Jan. 26, Ryan Reynolds, 43, spent some quality time with his eldest daughter James, 5, during an afternoon outing in Manhattan. The Deadpool actor walked the streets with his daughter on his shoulders, working his muscles and pulling at our heartstrings. He looked ready to battle the freezing temps in his blue puffer jacket with a matching baseball hat and crisp white Converse sneakers. The actor topped off his look with thick black-framed glasses. What a sweet pair!

James looked especially adorable riding on her dad’s shoulders in a kid version of her dad’s jacket. She also wore a pair of mint green rain boots and kept warm with a cute white cat beanie, complete with tiny knit ears. The duo looked like they were enjoying the sunny afternoon, but a few people were noticeably missing from the scene. Ryan’s wife Blake Lively, 32, his second daughter Inez, 3, and their newborn baby girl, whose name is still a secret, were nowhere to be seen.

Blake and Ryan, like they did with their other daughters, have kept the details of their third daughter under wraps. But they did bring the little one out with them on a breakfast date in New York City on Jan. 10. The Sisterhood of the Traveling Pants actress wore a green winter jacket and black leggings as she held their baby girl close to her chest. She used a blanket to completely cover the little one, so paparazzi were unable to get a photo of her. 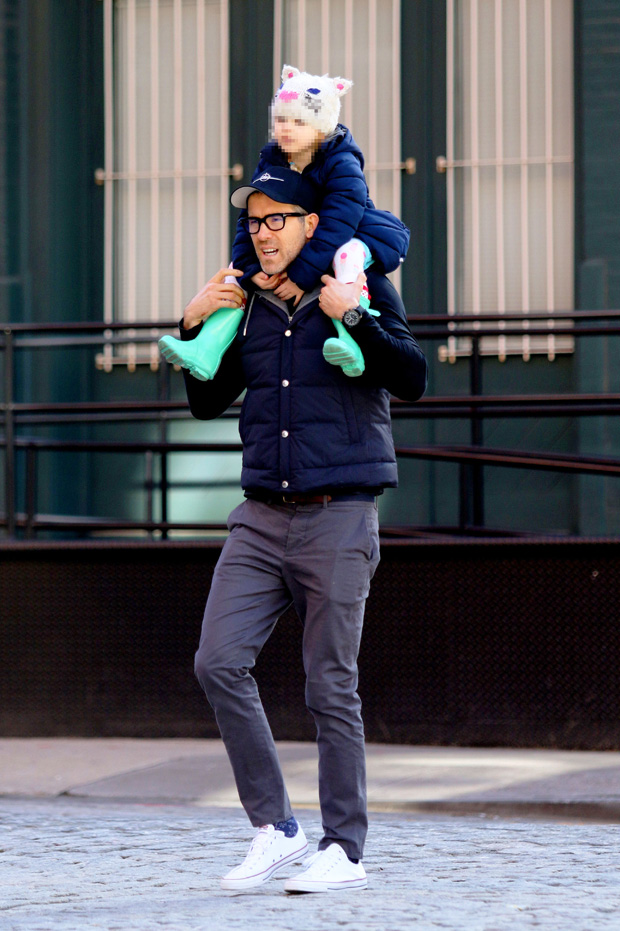 The closest they came was in one fuzzy pic when they were inside, and the blanket came off. But Blake kept baby Reynolds underneath her coat with just the top of her head, including her eyes, nose and white, green, and yellow hat visible.

Blake didn’t reveal her third pregnancy until she was in the middle of her second trimester. She debuted her baby bump in a yellow dress when walking the red carpet at the premiere of Ryan’s animated film Detective Pikachu on May 2, 2019. She reportedly gave birth over the summer, but the news wasn’t reported until early October 2019.