Sophie Turner and Joe Jonas served up edgy looks on the red carpet at the 62nd annual Grammy Awards at Staples Center in LA on Sunday night. The Game of Thrones actress showed off her long legs in a black mini dress on the red carpet, which featured a multi-colored bedazzled top with buttons. Meanwhile, the “Sucker” singer wore a matching black bomber jacket and pants with gold and blue designs.

Joe hit the red carpet first with his brothers, Nick and Kevin Jonas. The trio posed as a band before they met up with their wives to pose for a second round of red carpet snaps. The JoBros’ wives are on hand tonight to support their husbands, who are nominated for Best Pop Duo/Group Performance for their hit song “Sucker.”

Sophie’s Grammys look is a complete 180 from her SAG Awards ensemble at the January 19 awards show, in which she rocked a stunning Louis Vuitton gown. The Game of Thrones cast was nominated for “Outstanding Performance by an Ensemble in a Drama Series” for the fifth time in a row, but unfortunately didn’t take home the SAG award. 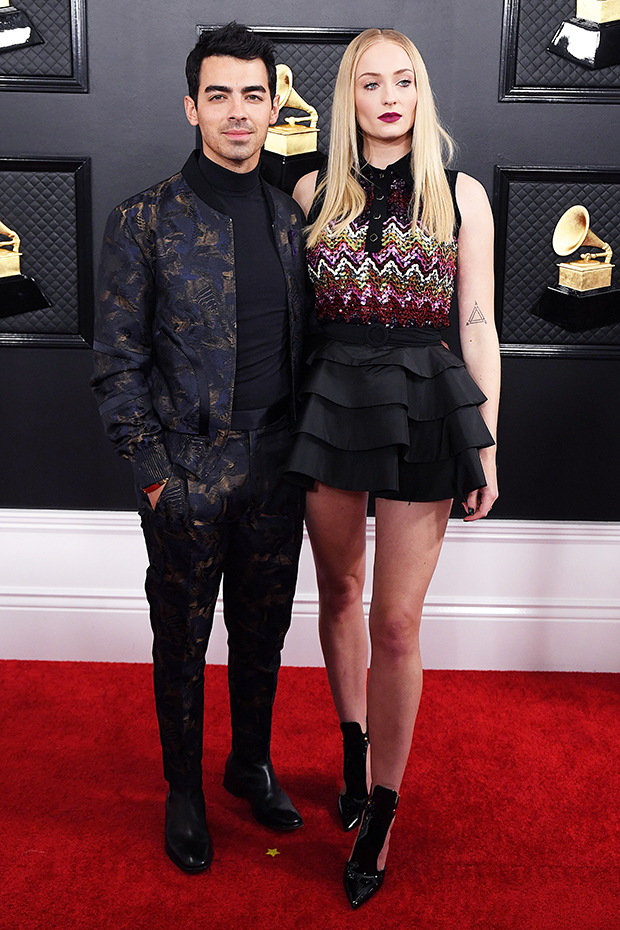 Joe Jonas & Sophie Turner on the red carpet at the 2020 Grammy Awards in LA on Sunday, January 26. (Photo credit: REX/Shutterstock)

Joe and Sophie, who got married in June of 2019, stepped out at the Grammys after they were spotted sharing a sweet kiss after a lunch date on January 22. The couple dined with a friend at Sherman Oaks’ Sweet Butter Kitchen. Sophie and Joe looked casual and cozy in their nearly matching sweat sets.

As more couples continue to arrive on the red carpet at the 2020 Grammy Awards, take a look at all of the best duos in our attached gallery. Cheers to another year of adorable duos on music’s biggest night!