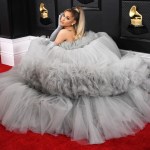 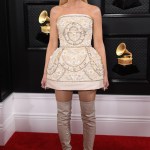 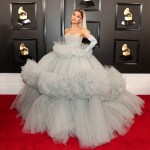 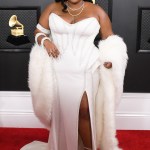 Blac Chyna, 31, caught fans by surprise by attending the Grammy Awards on Jan. 26! The reality television star made heads turn even more thanks to her lavish gown made of intricate red beads, and double thigh-high slits that split the dress into back and front sections. The gown’s bodice featured long sleeves and an asymmetrical cut — a vintage touch!

To complement the glamorous dress, Chyna’s long raven tresses were styled into side-swept waves that fell in one swoop over her shoulder. While the dress and hairstyle were standout features in themselves, Chyna stuck to traditional red carpet makeup with bronzed eyes and nude lips.

Chyna joined the many other attendees who graced the show in gowns that earned a spot in HollywoodLife’s gallery for best Grammys dresses of 2020! Ariana Grande looked like she was wearing two of Cinderella dresses in a Giambattista Valli ballgown with a massive tulle skirt, while Chrissy Teigen made a statement in orange ruffle sleeves that added extra flair to the red carpet. We love when our icons wear ensembles matching their powerful personalities!

Once again, Chyna is in the spotlight! She made headlines earlier in January after a report claimed Rob Kardashian, 32, filed for primary custody of their daughter Dream Kardashian, 3, and then again after the Kardashians’ lawyer accused Chyna of arriving to a deposition 90 minutes late and proceeding to commence a photo shoot during the lunch break in Sept. 2019, according to court documents. For tonight, though, it appears that Chyna is enjoying a drama-free night filled with music — not legal papers!