It’s safe to say that Margot Robbie, 29, can’t do any wrong when it comes to red carpet looks! The blonde bombshell looked absolutely stunning at the 2020 Screen Actors Guild Awards on Sunday, Jan. 19. The actress wore a pleated and multi-tiered blue plaid Chanel gown. She paired the glamorous dress with a beautiful set of gold link necklaces, set with pearls and beautiful black stones and a gold chain and black satin belt. Can she be any more gorgeous?!

At the 2020 SAG Awards, Margot is nominated for Outstanding Performance by a Female Actor in a Supporting Role for her part in Bombshell. It’ll be a close race with a category as talented as this one. Margot is going up against some serious star-power, including Laura Dern for her role in Marriage Story, SAG newcomers Scarlett Johansson and Jennifer Lopez for their parts in Jojo Rabbit and Hustlers respectively, and fellow Bombshell co-star Nicole Kidman. 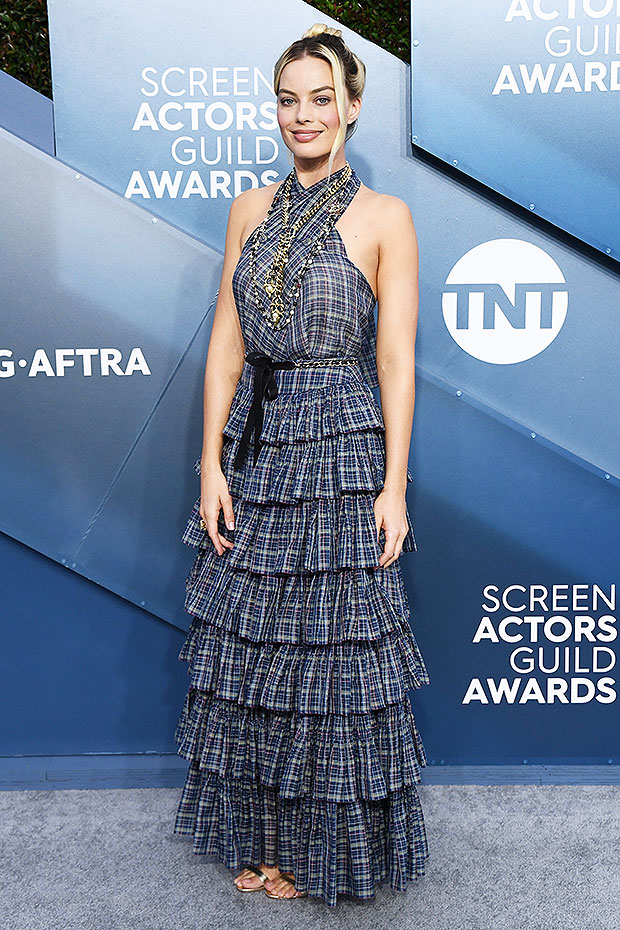 Although she hasn’t won a SAG award yet, Magot has been winning on the red carpet with the stunning looks she’s been serving this award show season. On Jan. 5 for this year’s Golden Globes, the actress donned a bold, strapless sequined bodice with a white skirt, wearing her natural blonde hair down with beachy waves. The dress even had pockets!

Although there isn’t anyone hosting the annual award show, the evening will still feature some familiar faces who will be presenting awards during the ceremony. Viewers will be able to catch Stranger Things star Millie Bobby Brown and Superstore actress America Ferrera along with Leonardo DiCaprio, who will be giving the Life Achievement Award to Hollywood icon to Robert De Niro.