Ammika Harris spotted a negative comment from a social media user who called her ‘average’ on Instagram, Jan. 16. And, let’s just say her response was simple and sweet.

Kill em’ with kindness! Ammika Harris kept it short and sweet when she replied to an internet troll on Instagram on Thursday night. The model, 26, shared a series of sultry snaps of her in a plunging, white newspaper dress. While most of her fans gushed over the photos, there was IG user who tried to rain on the parade.

“CB can do much better 🙄Shes just average all the way around🤪,” the Instagram user wrote under Ammika’s post. The new mom caught wind of the negative words, and shut her down with a simple red heart emoji.

Ammika’s response came after she clapped back at a separate IG hater on January 11, who questioned her relationship with rumored boyfriend, Chris Brown. The model and the “Freaky Friday” singer recently welcomed their first child together, a baby boy named Aeko just before Thanksgiving. 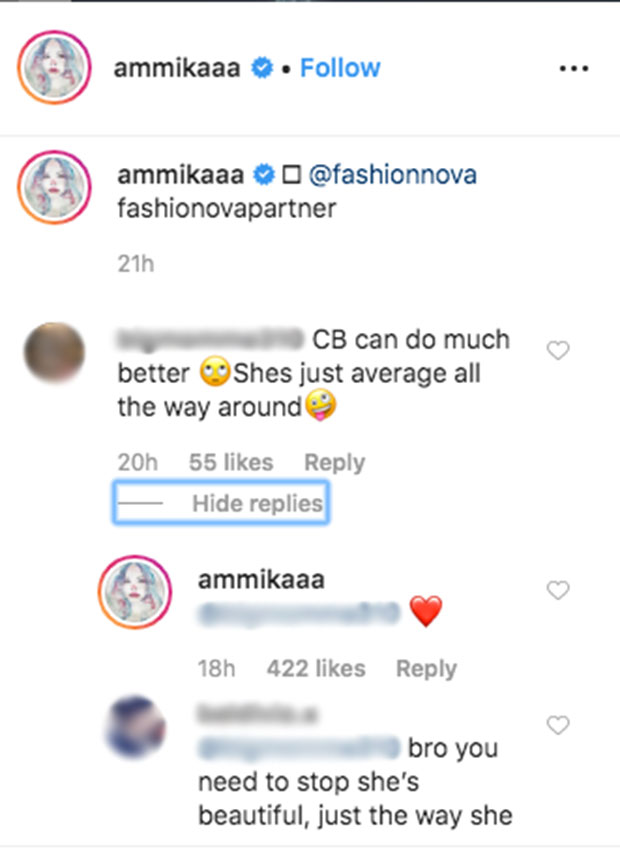 “Wishful thinking but that is not the case,” the critic wrote under a solo shot of Ammika looking gorgeous in a dress by PrettyLittleThing. “He has love for her because she is baby boy Aeko’s mother but he is not in love with her, big difference.”

The internet troll went even further as to question their bond as a family, writing, “They are not a happy family as they co-parent and do what is best to have a healthy relationship or Aeko’s best interest.” — That time, Ammika used her words instead of just an emoji to reply. She hit back with, “Glad you know our business better than we do.” And, she’s right.

We really don’t know what’s going on between Ammika and Chris. Lately, it seems as though things are heating up between the pair. They’ve been flirting back and forth on Instagram after sharing Aeko’s face in photos for the first time. It was on January 11 that fans started to notice that both Chris and Ammika have been wearing diamond rings on their left hands in recent photos. Unfortunately, they have not addressed any reports about their relationship.