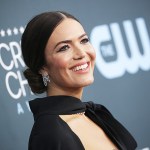 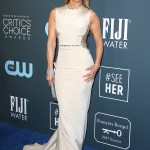 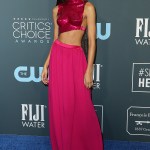 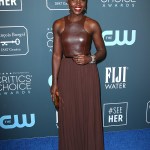 Awards season is underway! The stars were out again for the Critics’ Choice Awards in Los Angeles, and the looks were absolutely show-stopping.

The Critics Choice Awards took place in Los Angeles on Sunday, Jan. 12 and the red carpet looks did not disappoint! The critics-voted award show took place at the Barker Hanger in Santa Monica, and stars were dressed to the nines for the 25th annual affair. Kristen Bell, 39, was glam in a ’70’s inspired silk number by Vietnamese designer Cong Tri that might just be her chicest look ever. The sleeveless chartreuse jumpsuit was perfect for a red carpet with it’s asymmetrical cut and small fishtail train on the right-hand side. Kristen accessorized with a simple pair of dangly earrings, and kept her blonde hair slicked back as she let the gorgeous Spring/Summer ’20 ensemble speak for itself.

The Frozen star was previously announced to be the recipient of the fourth annual #SeeHer Award, which recognizes a woman who “pushes boundaries on changing stereotypes and acknowledges the importance of authentic portrayals of women.” Beyond acting, Kristen is well-known for her advocacy and philanthropy work with a number of causes close to her heart.

Specifically, she has served as first global advocate for the Women’s Peace & Humanitarian Fund, and appeared as a spokesperson in a number of PETA campaigns. Previous award recipients are How To Get Away With Murder’s Viola Davis, Superwoman‘s Gal Gadot, and The Crown‘s Claire Foy.

The always sexy Jennifer Lopez, 50, rocked a form-fitting champagne colored gown on the blue carpet. The sleeveless ensemble showed off her toned arms, and featured gorgeous crystal details around the high-neckline and waist. J.Lo was dripping in ice with stunning diamond chandelier earrings and bracelet, which were vintage Harry Winston, along with an elegant silver clutch. The Hustlers star has had a notably more conservative approach to this awards season, selecting a classic strapless Valentino gown for the Golden Globes and a similar 1950’s inspired choice for the Palm Springs Film Festival. Jennifer was nominated in the Best Supporting Actress category for her buzz worthy role as stripper Ramona in Hustlers, which she also helped produce.

Nicole Kidman, 52, was also a show-stopper in a black strapless gown by Armani. Featuring a glamorous velvet bodice, the gown evoked Old Hollywood with it’s full tulle skirt. A sheer black sequin fabric allowed for the nude skirt to peek through, adding a whimsical and romantic element to the stunning look. Nicole, who is nominated in the Best Actress in a Drama series for her role on HBO’s Big Little Lies, had her blonde locks styled into a voluminous blow out, accessorizing with a black clutch, floral diamond stud earrings and a simple bracelet.

Mandy Moore, 35, kept the jumpsuit theme going with a chic ensemble by Elie Saab. The black number featured a strapless cut and skinny cigarette pant — differing from the disco vibes of Kristen’s — and she finished the look with a dramatic cape tied with a bow. The suit featured two chain details going around the sweetheart cut bodice, reminding us of Chanel’s iconic flap bags.

Of course, we can’t forget about the men on the red carpet! Host Taye Diggs, 49, was dapper in a classic black tuxedo, bow-tie and crisp white shirt. Our hat goes off to Milo Ventimiglia, 42, for mixing things up: the This Is Us actor opted for an almond beige-colored tuxedo jacket, paired with his black pants. The neutral color totally amped up his look, and he was one of the chicest on the carpet.