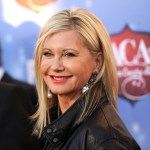 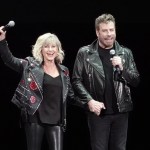 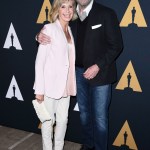 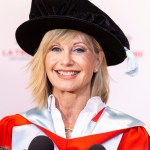 John Travolta & Olivia Newton-John made Grease fans go nuts when they dressed up as their iconic characters for a very special evening out!

Well this looks familiar! John Travolta, 65, and Olivia Newton-John, 71, dazzled hundreds of people on December 13 when they recreated their characters Danny and Sandy at a Meet n’ Grease sing-along event at the Coral Sky Amphitheater in West Palm Beach, Florida. Olivia shared a backstage photo on her Instagram where she was dressed wearing a yellow cardigan and matching skirt similar to the outfit her character she wore in the 70’s classic while John rocked an all-black ensemble complete with a leather jacket. “First time in costume since we made the movie ! So excited!!,” she captioned the snap that left celeb fans like Jane Seymour, 68, and Leeza Gibbons, 62, in absolute hysterics. “Best of all time!” the former talk show host gushed in the comments section.

Good girl gone bad. Olivia ditched her naive look later on in the evening for a black jacket and leather leggings just like the one she wore in the legendary final scene of Grease forty years ago. She and John did a Q&A with fans after the film’s showing where they embraced one another with a big hug and were all smiles throughout.

John and Olivia are scheduled to make two more appearances together, first in Tampa on December 14 and then in Jacksonville one day later. Here’s hoping that they wear those amazing outfits again so even more Grease fanatics can indulge in all things Danny and Sandy one more time!

Grease no doubt helped John & Olivia become global superstars after its release in 1978. The soundtrack is just as memorable as the film that spawned hits for both actors including “Hopelessly Devoted To You” which hit number 3 on the Billboard Hot 100 charts.

We could be seeing more of them as a Grease prequel is in the works at Paramount that tells the summer love story of Danny and Sandy before they attended the same school. “Everyone would love to see John and Olivia do a cameo,” a source told HollywoodLife EXCLUSIVELY in April 2019. Make it happen guys!