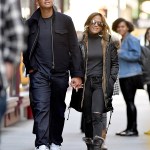 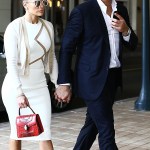 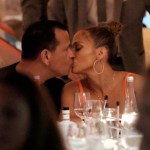 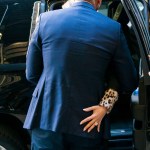 Wearing a chic dress and slick suit, Jennifer Lopez and Alex Rodriguez made a beautiful couple as they headed out for Italian cuisine in Miami. The lovers had just left a graduation party at the University of Miami!

Looking good and feeling good. Jennifer Lopez, 50, and Alex Rodriguez, 44, gave us a lesson in both formal wear and appropriate PDA as they stepped out in Miami on Dec. 12. JLo looked ready to attend an art gallery mixer in a white bodycon dress with a geometric gold design, which she layered with a chic cardigan in the same white and gold colors. The Hustlers star carried a bright red miniature purse in one hand, and in the other, held on tightly to A-Rod who was the definition of swagger in his dark navy pantsuit, slightly unbuttoned dress shirt and aviators.

The engaged couple had just attended a graduation party at the University of Miami, an institution that A-Rod has close ties with. Not only is the former MLB star a part of the university’s Board of Trustees, the school named a baseball stadium after him: Alex Rodriguez Park! After the party, the couple kept the celebration going by heading out for lunch at Villagio, an upscale Italian restaurant in Coral Gables.

It’s safe to say that JLo is not actually in love with “Chad.” That’s the name of Pete Davidson’s Saturday Night Live altar-ego, whom JLo pretended to fall for in a hilarious skit that aired on the show’s Dec. 8 episode. A-Rod burst into the scene, flower bouquet in hand, and then stormed off after witnessing the “betrayal.”

Despite the made-up scenario that played out on SNL, JLo and A-Rod are still going strong, as you can infer from the hand-holding above! A-Rod proposed to his girlfriend on March 9, after more than two years of dating. While JLo is in “no major rush [to get married]” and “neither is Alex,” which a source EXCLUSIVELY told HollywoodLife in September, the bride-to-be did confess to wanting more kids with her fiancé during her People’s People Of The Year interview, which was published on Dec. 4.