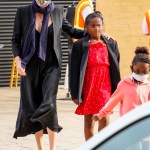 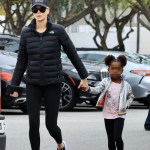 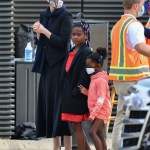 Charlize Theron, 44, totally stunned the red carpet in her plunging dress at the LA premiere of Bombshell on Dec. 10. The Oscar winner wore the little black dress designed by Dior and looked positively radiant, showing off her toned arms and trimmed figure in the process. While walking the red carpet, Charlize struck a fierce pose and smiled for the cameras, flaunting the intricate detail of her ensemble. The little black dress — which featured a deep V-neck cut that went down her torso — also had the added detail of fringe, giving the dress a vintage ’20s feel. The actress paired her look with minimal jewelry and looked completely confident and powerful for the occasion.

Naturally, Charlize wasn’t the only actress to strut her stuff on the red carpet. She was also joined by her Bombshell co-stars Nicole Kidman, who sported a stunning pantsuit for the premiere, and Margot Robbie, who opted for a whimsical lavender gown with floral appliqué. The three women star in the film, which depicts the fall of Fox News chairman and CEO, Roger Ailes (played by John Lithgow in the film) after a swath of sexual harassment allegations were levied at the corrupt media titan. All three stars have earned wide acclaim for their work, with Charlize playing former Fox News pundit Megyn Kelly, Nicole as Gretchen Carlson, and Margot as a composite character named Kayla.

While the subject matter of the film is incredibly serious and topical, that didn’t stop Charlize from inspiring her fellow co-stars, including Ashley Greene! Ashley plays Abby Huntsman in the star-studded cast and couldn’t help but gush about Charlize’s raw, towering talent. “I got there [to the set] and Charlize was such a force, but she’s so warm, and engaging, and lovely,” Ashley shared EXCLUSIVELY with HollywoodLife at the October 28th Elizabeth Glaser Pediatric AIDS Foundation A Time For Heroes Family Festival. It seems, too, that Charlize’s impeccable performance as Megyn is leading her down the awards road once again!

On Dec. 9, Charlize earned a Golden Globe nomination for Best Actress — Drama from the Hollywood Foreign Press Association for her work in the film. Her co-star, Margot, also received a  nomination for her work in the category Best Supporting Actress In A Motion Picture. With the Globes just around the corner — on Jan. 5 — fans of the talented actress cannot wait to see what she rocks on the red carpet next!