Kristen Bell, who plays Anna in both Frozen movies, recently joked that she was ready to formally announce Frozen 3, 4 and 5.  But could her quip come true? According to Jennifer Lee, the Oscar winning writer and director behind the beloved franchise, it may take a “good idea” from Kristen to make Frozen 3 happen. While attending opening night of Frozen the Musical at the Hollywood Pantages Theatre on Dec. 6, Jennifer told HollywoodLife EXCLUSIVELY that she “feels done” when it comes to writing another Frozen film.  But fans shouldn’t let their hopes totally melt, because Jennifer’s all for hearing ideas for a follow up from Kristen.

“She is so talented. She was instrumental to Anna’s journey,” Jennifer told HL, “and I’m so proud that she joined us on saying, “Look, Anna’s … you look to her as the optimist [but] we all go through struggles. I have struggles every day, and I choose to be this way, and get up off the floor and never give up, and that was the journey that Anna should have.” And we agreed. So she’s been an incredible partner in it, so maybe she has a good idea [for Frozen 3].”

With Frozen 2 currently in theaters the talented writer and director — who is also the head of Disney animation — is ready to take a step back from the adventures in Arendelle.”As of now I feel done, but I’m also very tired, so ask me in a year,” Jennifer told HL. “The thing about Frozen 2 is it only came about because we said there is more story here. The girls have never been together. I want to see that. What is Elsa’s journey? Why does she have powers? Chris and I had so many questions, and the world was asking them, and we naively went, ‘Let’s do it!’  We had no idea what we were doing. We went into the unknown ourselves, and I’m glad we did, but it was so much harder to do 2 than it was to do 1.  I can only imagine what 3 would be, how much harder that would be. 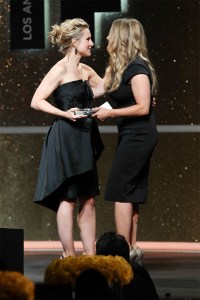 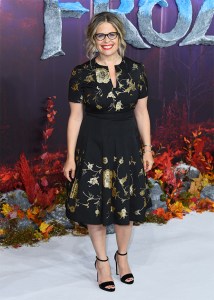 “We’d never done a musical sequel before theatrically. There was no precedent. We wanted to do a story featuring the same characters, not just changing circumstances, growing them, changing them, changing characters people have come to know. All of those things we tackled we just said, ‘We must be crazy.’ But it felt right to us, but it was a four year journey and so I can only imagine if there were ever to come it would have to come with us feeling like it had to be told, because it is so hard to do. It takes everything you have, so right now we’ve got nothing in the tank. I’m looking to be filled up tonight with the performance.”

Jamie Lynn Spears' Daughter, 13, Is Taller Than Her & So Grown Up In Rare Photos