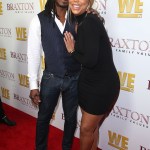 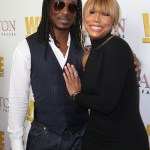 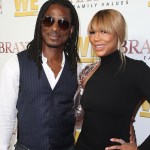 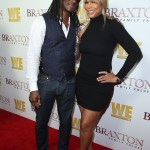 David Adefeso was filled with nothing but joy when his ladylove Tamar Braxton threw him an epic 50th birthday celebration.

What a night! Both Tamar Braxton, 42, and her man David Adefeso shared a ton of Instagram photos and clips from his birthday party on Nov. 26. The “Love & War” songstress posted a sultry snap of her cozying up next to her boyfriend right before he blew out the candles on his cake. “Celebrating life is probably one of my favorite things to do,” she captioned next to the pic. “This night was so magical for a zillion reasons! Thank you @david.adefeso for allowing love to celebrate you on your bday.” Tamar looked absolutely incredible in a dazzling black dress that came equipped with a fabulous head piece and feathery wings on her shoulders. David on the other hand cut a handsome figure in his all white look during the big bash that left him feeling emotional about so much.

David gushed about his exciting evening in his own Instagram post, where guests like WNBA superstar Chiney Ogwumike, 27, and former Divorce Court Judge Mablean Ephriam, 70, partied the night away. “Had the best birthday ever!! My @tamarbraxton made the day completely unforgettable!” he wrote. “I am so grateful to all my friends and family who came from all over the world to celebrate with me. Thank you. I love you all soooooo much.”

The Nigerian-born entrepreneur wasn’t joking when he said that people came in from all over the world to celebrate his 50th bday. He revealed that his 80-year-old mother flew in from Lagos during a lengthy Instagram post that also talked about his love for the R&B singer. “Loving my @tamarbraxton brings me joy; that joy always keeps hope alive,” he wrote in part.

The birthday celebrating for David started way before he officially reached the 50 year milestone on Nov. 23. Tamar threw  a separate fiesta for him on Nov. 19 where they passionately kissed in a sexy PDA-video she posted on Instagram.

Here comes the bride? There might be wedding bells in the near future for these two! Tamar said “Yes” in response to Wendy Williams, 54, asking her if they will walk down the aisle together during an appearance on her talk show in September 2019. “Now, that’s a piece of chocolate, I won’t give up,” she also added.