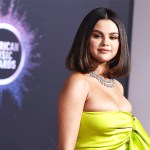 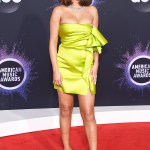 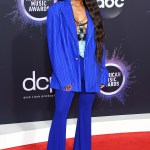 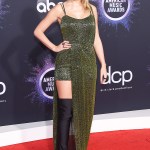 Selena Gomez, 27, may have a newfound fan in Hailey Baldwin, 23. Following the pop star’s emotional return to the American Music Awards stage on Nov. 24, where she gave a rousing performance of her songs “Lose You To Love Me” and “Look At Her Now,” Hailey took to Instagram and ‘liked’ the video from Selena’s makeup artist that featured Selena’s look for the night. Hung Vanngo posted the quick clip that showed off Selena’s gorgeous, glitter-clad eyes and flawless makeup. “#SelenaGomez x #AMAS2019 ❤️🌟⚡️💫✨⭐️,” Hung captioned the video of Selena batting her eyelashes. It’s the exact video Hailey liked!

Not only did Selena look incredible and ready to perform her two new songs, she opened the entire awards ceremony! Selena was the first artist to take to the stage, in a full length, long sleeve black gown to perform “Lose You To Love Me.” The camera even added a black and white filter over the songstress as she gave an emotional rendition of the song. Before leaving the stage, the entire mood changed to a color backdrop with Selena donned in a short, metallic romper to perform “Look At Her Now.” She danced to the beat and sang her heart out and fans loved it!

While fans were all about the emotional, triumphant performance some trolls attacked Selena for her showcase at the start of the show. But, as they always have, Selena’s fans came to her defense with a lot of empathy, especially considering the track she performed gave some not-so-subtle nods to her previous relationship with Justin Bieber, 25. “It’s been how long since @selenagomez has performed!? I’m sure she was hella nervous singing such personal songs for the first time and we don’t know what she’s going through physically/health wise. I’m not here for the shady tweets ✋,” one fan tweeted.

Naturally, during the performance, fans were thinking of Selena’s tumultuous relationship with Justin, which likely inspired a slew of songs from her upcoming album. The couple dated on and off starting in 2011 and finally called it quits by March 2018. Just a few short months later, Justin married Hailey in a courthouse ceremony in September before the couple had their official celebration with friends and family on Sept. 29, 2019. Since she debuted her new songs, Selena has garnered huge support and fans cannot wait to see her perform them more!