Christina Aguilera went old Hollywood glam on the red carpet at the American Music Awards in LA on Sunday night. The singer, 38, dazzled in an all-white beaded dress that was belted at the waist. Christina was covered from head-to-her white platform boots in white embellishments throughout her dress, which also featured exaggerated shoulders and a hood.

The former The Voice coach kept her platinum blonde locks back inside her hood and let her dress steal the spotlight. She coordinated her jewelry with her loud ensemble and wore pearl rings and necklaces. Christina even donned bright white nails.

Christina nailed the AMAs red carpet before she performed “Fall on Me”, her new collaboration with musical duo A Great Big World. Xtina put her insane vocals on display while Ian Axel sang from the piano. At the end of the emotionally powerful performance, the crowd got on their feet for a standing ovation for the artists, who aren’t strangers to sharing the AMAs stage. Christina and the duo performed their hit, “Say Something” at the 2013 show. 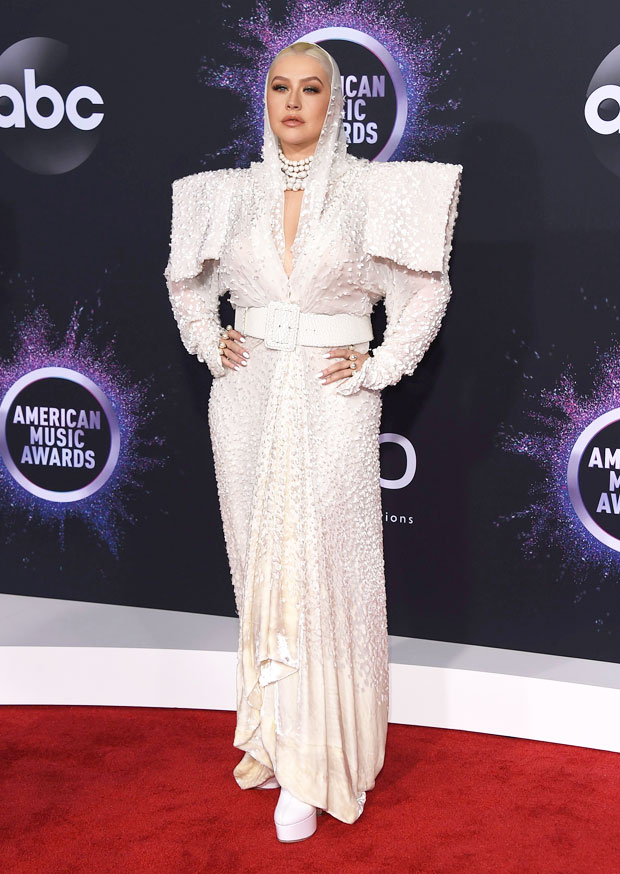 Christina Aguilera on the red carpet at the 2019 American Music Awards on Sunday, November 24 in LA. (Photo credit: Jordan Strauss/Invision/AP/Shutterstock)

It’s been a whirlwind year for Xtina. She’s been busy performing shows for her Las Vegas Residency, which began on May 31 at Zappos Theater inside PH Vegas.