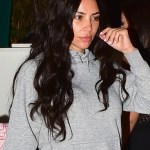 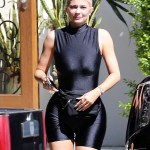 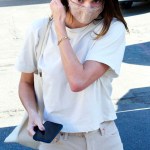 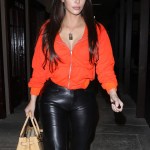 Kylie Jenner was comfy and casual while out and about in Beverly Hills on a shopping trip after rumors swirled that she was romantically linked to Drake.

Keeping it casual — Kylie Jenner, 22, was dressed down for her latest shopping trip on Nov. 5. The Keeping Up With The Kardashians star was spotted at What Goes Around Comes Around in Beverly Hills, wearing a off-white hoodie and matching sweatpants. Kylie pulled her hair back into a tight bun, while going makeup free for the outing. She donned a pair of black sunglasses and white trainers to complete her relaxed ensemble, but also accessorized with a pair of silver hoop earrings. It was a welcome break from the spotlight for the mogul, as rumors continue to swirl about her relationship status with rapper, Drake, 33.

Kylie and Drake have known each other for quite some time, but since Drake’s 33rd birthday party at Goya Studios in Los Angeles on Oct. 24, speculation has risen that the pair have turned their friendship into something more. While at the “Nice For What” rapper’s birthday bash, Kylie and Drake were reportedly seen getting “flirty” with one another. Rumors of their courtship only grew once Kylie reunited with Drake at his Halloween bash at Delilah’s in West Hollywood on Oct. 31. “Kylie was rapping to songs and dancing with her friends while she was next to Drake, but they weren’t dancing together, they seemed to have a connection, though,” a source told US Weekly following his birthday party.

Now, things seem to be heating up between the duo. “[They] have been spending time together recently,” a source shared with People on Nov. 8. “They’ve been friends for a long time and Drake is very close to the family.” The outlet’s insider also shared that the pair have been “hanging out romantically” now that Kylie is no longer in a relationship with Travis Scott, 28. However, a conflicting source rebuked the idea that Kylie and Drake’s relationship was romantic, saying they are just “friends.”

Amidst the rumors, Kylie and Travis are still putting their focus on their daughter, Stormi Webster, 1. The mogul and mom was spotted in the days before Halloween with sweet Stormi at a pumpkin patch, documenting the adorable moments on Instagram. Travis was also in attendance for the fall family activity, although the former couple didn’t take any photos together. Kylie was adamant about reminding her fans how important Stormi’s wellbeing was to her and Travis.

After dismissing rumors she had seen her ex, Tyga, 29, Kylie reminded her fans and followers on Oct. 3, “Travis and I are on great terms and our main focus right now is [our daughter] Stormi. Our friendship and our daughter is priority.” While the rumor mill continues to run, Kylie is maintaining her focus, and taking time away from the cameras to indulge in a little shopping trip!