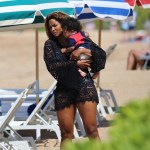 The premiere of ‘America’s Most Musical Family’ has finally arrived. HL sat down EXCLUSIVELY with the judges and host to discuss why they wanted to do the show, their judging techniques, and more.

America’s Most Musical Family premieres Nov. 1 at 7 p.m. on Nickelodeon. The musical competition series will feature 30 family bands who will compete in front of celebrity judges Ciara, David Dobrik, Debbie Gibson, and host Nick Lachey for a recording contract with Republic Records and a $250,000 cash prize. America’s Most Musical Family is the perfect show for your entire family to enjoy. “There’s nothing like watching good talent and in this case what was really exciting is that this is the first show of its kind where it’s a family-only competition show and there’s so many unique things about it,” Ciara told HollywoodLife.

Nick was equally excited and admitted that he felt like he had “kind of a unique perspective in that I was in a group [98 Degrees]. Obviously, I still am in a group with my brother [Drew Lachey]. I kind of knew what it was like to work with family in a musical capacity and so as a host I thought, oh, that was a cool perspective.” As for Debbie, she said, “I grew up singing with my sisters and singing with my dad. Even still, when my dad comes to visit I throw him in the studio and I’m like, ‘We’re doing a Christmas duet!'”

David is a huge fan of talent shows himself so getting to be a part of one was a real treat. “The fact that we have front row seats to one of the best talent shows I think was kind of the best part for me,” he told HollywoodLife. “I love watching families and I like watching the backstories and seeing what they’ve overcome to do certain things. It was so fun to watch that.”

Judges’ panels are crucial to a show’s success. Ciara, David, and Debbie revealed what kind of judge they’re going to be on the show. “I critique with love,” Ciara said. “I think it’s important to leave acts with nuggets that help me, nuggets of knowledge or wisdom that I learned from experience to hopefully help them if they don’t make it to the next round. I try to put myself in their shoes. It’s like, what would I be feeling? What would I be thinking about the next thing? I try my best to put myself in their shoes and then try to give them those bits of information that I learned from experience. I had to bump my head a few times. I just wanted to make sure I did that but also encourage them. I critique with love. I am a judge that critiques with love.”

Debbie said she’s been told she’s “more critical than the others but I think that I’m constructive with my criticism, nurturing but constructive.” David admitted that he was the “surprise” judge. “I was always surprised,” he continued. “There wasn’t a performance where I wasn’t like, ‘I can’t believe it’s getting better.’ Every other performance was just completely impressing me. I was all about stage presence and how much fun everyone was having because you can feel the excitement that the family’s giving off when you’re sitting there and that’s kind of what was important to me.”

David may not be a famous singer like Ciara, Debbie, and Nick, but Debbie said the YouTube star’s opinion was always valued during deliberations. Debbie said, “It was always interesting to hear David’s perspective because he’s not like, ‘She was a little flat on that high note.’ He was like, ‘Who moved me? Who made me want to have fun?’ And I think Ciara and I tune into David’s opinion very seriously because he represents that music fan out there.”