Play ball! Justin Timberlake, 38, appeared to be having a blast with his baby boy Silas, 4, and wife Jessica Biel, 37, on Oct. 29. The party-of-three were at a park in Los Angeles for Silas’ baseball practice when things took a turn for the adorable. Silas decided to challenge his father to a race, which the “Mirrors” singer happily accepted! The youngster kept a good lead on his dad as they made their way through the field. Both were were appropriately dressed for the occasion, with Justin sporting a Nike t-shirt and khakis while Silas rocked an LA tee and blue shorts. The father/son duo were both beaming with glee during their adorable father/son moment.

Jessica, meanwhile, was spotted chatting with another parent while her little one and husband engaged in their silliness. The former 7th Heaven star, who was also joined by her mother Kimberly, 64, during the big family outing, looked fall-ready in a gorgeous white jacket that she wore over a grey top and faded jeans. She also carried around a big jug of water to make sure Silas stayed hydrated during his big practice.

Silas looked to be having a great time with both his family and fellow baseball players. At one point, he was seen running around with the other kids while Justin and Jessica looked on. His spirits remained in tact after it was all over, as he held hands with his mommy before they jetted off. 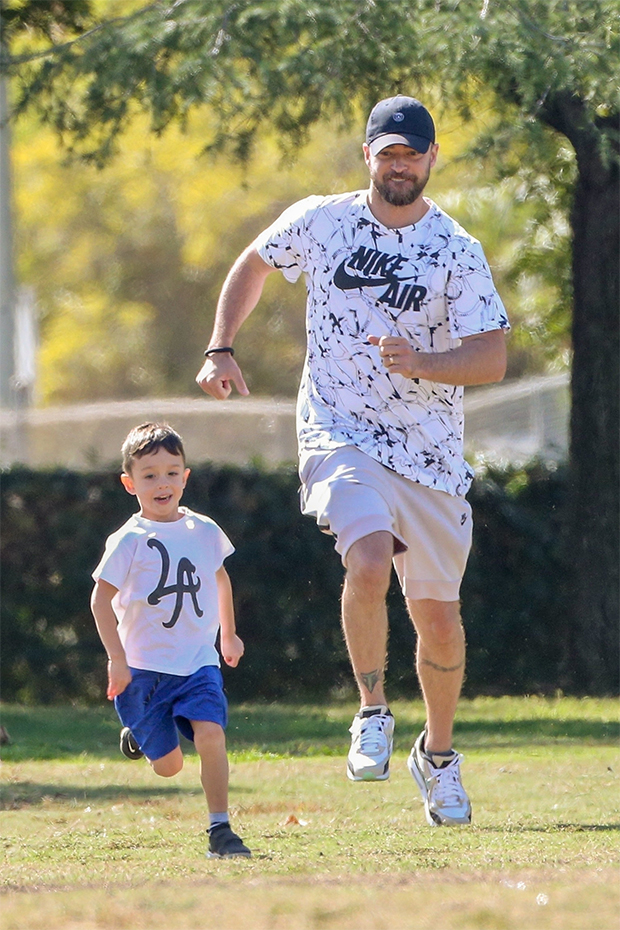 Justin and Jessica are known for keeping their family life private so this was a rare glimpse into their life together with their only child. The Grammy winner and his son were previously seen enjoying a round of golf together at the Omega European Masters in Switzerland on Aug. 27.

The superstar couple still make sure to have their fun with one another in the public eye from time to time, though. Jessica dressed up as Justin during his NSYNC days at the Casamigos Halloween party on Oct. 25. She dressed the part in a metallic jumpsuit and blonde, curly wig, with tiny blue sunglasses that looked identical to Justin’s iconic 1998 red carpet look at the American Music Awards. Incredible!