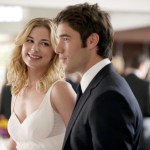 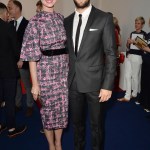 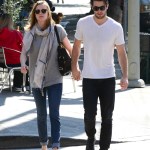 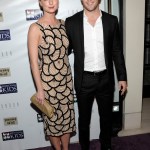 The couple who acts together, stays together. Emily VanCamp took to her Instagram to share the sweetest pic with her husband and former on-screen co-star, Josh Bowman, as they celebrate eight years together!

Emily VanCamp, 33, and Josh Bowman, 31, couldn’t be more in love! The couple are nearing their one-year wedding anniversary, but Emily went on Instagram on Oct. 27 to commemorate their eighth anniversary as a couple. In the pic, the former Revenge co-stars are flying high over the Okavango Delta in northern Botswana donned in headsets and smiling for a selfie. “Almost 1 year married but today marks 8 years together,” Emily began the caption to her romantic post. “Thanks to this human for making life the greatest adventure and also for being the best dad to our furry child Frankie. We are so lucky.” It was such a beautiful way to celebrate their near decade long relationship!

And Emily and Josh have truly had one wonderful Hollywood love story. The pair met while filming the ABC series Revenge, which ran on the network from Sept. 2011 until it’s final episode in May 2015. The couple started dating shortly after the show began, and by May 2017, they were engaged. Just like she commemorated their anniversary, Emily took to Instagram after Josh popped the question, posting a snap of herself with both of her hands covering her face and showing off her stunning engagement ring for all of her fans and followers to see! “It was in a forest,” Emily shared of the proposal. “We were in nature on a hike kind of doing what we do, it was very, sort of, us. So yeah, it was great, beautiful.”

The wedding was just as gorgeous, too! The duo married on Dec. 15, 2018 surrounded by loved ones in one of the most beautiful places. Their ceremony and reception took place in the Bahamas, with a slew of their former cast members on hand to celebrate. While Emily didn’t initially share pictures of their wedding, the actress did take to social media days later to share a slew of black and white photos from their happy nuptials. One photo even showed the newly weds beaming as they left their ceremony sight and walked through the streets hand in hand.

Almost 1 year married but today marks 8 years together❤️ Thanks to this human for making life the greatest adventure and also for being the best dad to our furry child Frankie. We are so lucky 💕💕💕

As their official wedding anniversary nears closer, fans love seeing Emily and Josh as strong as ever and enjoying married life. They’re truly proof that love can last in Hollywood, and they wear their love so well. Happy anniversary to the sweet couple!