Porsha Williams took her plus one, daughter Pilar Jhena to the A3C Panel: Blending Entertainment and Entrepreneurship panel, which she spoke at, in Atlanta on Thursday. The new mom was joined by her Real Housewives of Atlanta co-stars NeNe Leakes, Tanya Sam, and Cynthia Bailey, who also participated in the panel, along with Love & Hip Hop Atlanta star, Rasheeda. The reality stars were all smiles as they posed for a photo together, as Porsha held Pilar Jhena close.

Pilar was dressed in a cute grey sweatsuit with a matching headband that featured a tiny bow in her hair. She also had on little grey shoes as she clutched onto her mom’s red pantsuit, which included a cape. Meanwhile, Cynthia stunned in animal print, NeNe shined in a silver fringe jacket, Tanya sizzled in black leather and Rasheeda looked chic in a beige and red hat. NeNe also sported new front bangs and long straight hair with tinted aviators on.

What was intriguing about the photo was that NeNe, Cynthia and Porsha were all in the same frame together. RHOA fans will know that NeNe hasn’t been on the best of terms with Cynthia and Porsha. At the season 11 reunion earlier this year, NeNe and Porsha clashed when they determined that they were coworkers instead of friends. Porsha also claimed that NeNe never sent a gift when her daughter was born. Porsha also admitted later on that NeNe had sent her a cease and desist, to which she said she sent one right back. 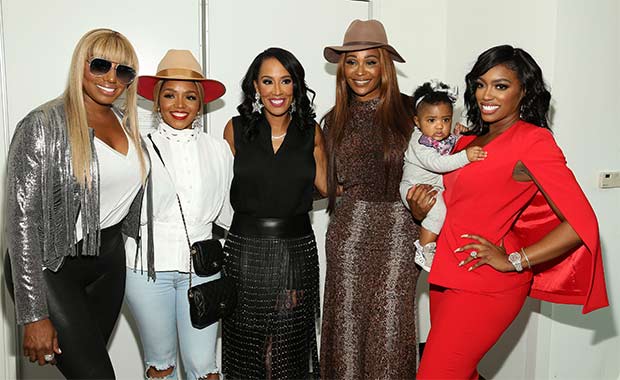 And, NeNe’s longtime friendship with Cynthia has also been on the rocks. In the new trailer for season 12 of RHOA, the two are seen in the midst of an emotional feud. The teaser ends with NeNe in tears while talking to Cynthia, who confronts her with a hand on NeNe’s shoulder. The Real Housewives of Atlanta premieres November 3 at 8 p.m. ET on Bravo.