Now that Lamar Odom has been eliminated from Dancing with the Stars, he’s got more time on his hands to gush about his gorgeous personal trainer girlfriend Sabrina Parr, 32. She posted an Instagram photo on Oct. 9 of a close up of her face, showing off her incredible skin, long eyelashes and light brown eyes. Sabrina wrote next to it, “I’m more than just a pretty little face. I’m a pretty big problem! #wcw #workoutwednesday #getuptoparr #sabrinaparr #shorthair.”

“This is why I named you babydoll. You so damn beautiful and perfect! You a problem fasho why you think they can’t stomach you lol,” Lamar, 39, wrote in the comments. Babydoll? How adorable! One fan named floweerbomb wrote underneath his sweet message, “@lamarodom I’m happy you found a good woman ❤️,” and a woman named yasella added “@lamarodom and she’s an angel. Take good care of her too Lamar. 🥰😇.” Sabrina replied to Lamar’s comment with “@lamarodom 😘😘” kissy face emojis. After the pair debuted their relationship on Aug. 2, just eight days later Lamar proclaimed on his IG, “I never thought I’d feel this way again… love you queen ❤️✊🏿.”

While fans are saying how lucky Lamar is to have Sabrina, she might have a reason to be fortunate to be dating the former NBA star, who claimed is “blessed,” in the pants. Lamar was caught adjusting manhood on live on TV during his final DWTS episode (even though he didn’t realize he was on camera). Afterwards Lamar admitted to HollywoodLife and other reporters after Monday night’s show,“Yeah, I think there’sThe Shade Room caught me adjusting myself. It makes me feel like a little creep.” But then he added, “I’m blessed. I guess that means I’m blessed,” when it came to the need to fix his pants dilemma. 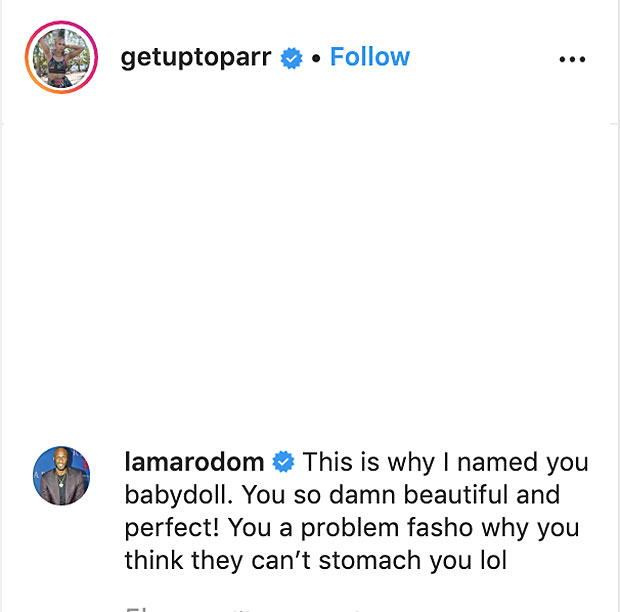 “I had to adjust myself; it’s the outfit,” Lamar continued to explain. “But it’s the truth…you understand that problem. It’s nothing to be ashamed about. I had fun.” Well, it’s a problem most guys probably wished they had!