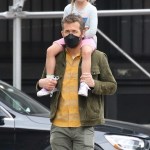 Ryan Reynolds took his adorable 3-year-old daughter, Inez, out on a daddy-daughter stroll in NYC after it was revealed that Blake Lively gave birth to their third child nearly two months ago.

Could Ryan Reynolds, 42, and his 3-year-old daughter, Inez, be any cuter?! The daddy-daughter duo was spotted taking a stroll through the streets on New York City on Friday, Oct. 4, after it was revealed that his wife Blake Lively secretly welcomed their third child nearly two months ago. HollywoodLife reached out to their reps for comment, but have not heard back as of this time.

The pair were dressed casually as they strolled side-by-side; Ryan looked dapper as ever in a white, short sleeve button down shirt and black pants. The father-of-three kept the rest of his look very casual, opting for white sneakers, thick-rimmed glasses, and a baseball hat. How Clark Kent of him!

Little Inez looked cute as a button as she walked next to her dad. The 3-year-old daughter of Blake and Ryan wore a very girly, all-pink outfit, rocking a pair of printed pink leggings, white flats with red hearts on them, and a pink sweater with jewel detailing at the top. She wore her blonde hair pulled back and held on tight to a stuffed animal in one hand and held her dad’s hand in the other as he carried her matching pink backpack on one shoulder. Seriously, if being cute was an Olympic sport, these two would have gold medals around their necks!

Ryan obviously loves his kids, and in an Instagram post on September 19, he joked about what it was like having children under the age of 3. “Bags under my eyes by two thankless a–holes who refused to go to bed the night before, despite the fact I read them Winnie the Pooh and nearly half of Stephen King’s The Shining,” he wrote. Looks like with the addition of his and Blake’s newest baby, he’ll have to deal with those bags under his eyes for a bit longer!