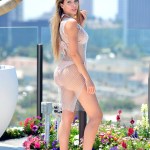 Farrah Abraham’s feud with the Kardashians is SO 2016. The MTV star said in a new interview that she’s trying to leave the negativity in the past, and uplift women, including the sisters, instead.

Feud? What feud? Farrah Abraham, 28, has no ill will toward the Kardashians, she told their friend, Jonathan Cheban, on his FoodGod podcast. Despite the controversial comments she made in the past, particularly about Kim Kardashian, she only wants the best for the sisters, she says. Jonathan wasted no time pressing the Ex on the Beach star about the controversy, which began in 2016. Essentially, Farrah said that she was more successful than Kim, and bashed Kim more in an EXCLUSIVE interview with HollywoodLife, calling her an Instagram model. But the past is the past, Farrah told Jonathan.

“I feel like that’s what people don’t understand [is that] it was so long ago,” she explained. “And then when [fans] meet you, they actually just don’t understand. So I don’t really want to bring that up because I do feel like everyone’s changed.  Like, I mean now I have a 10-year-old, or now everybody has tons of kids, or they are remarried…a lot of life has happened so I don’t really know if there is a valid point.” She added, “I think we’ve got to lift more women up, and if there was some nastiness between anyone back in the day; I mean, again lots of us have grown [and] changed. We have other lives, really.”

“Anger management, boxing, all the beating the crap out of bean bags has worked,” Farrah continued. “I do hear often that Kim and I look alike… and I think that’s flattering and I think that’s great. I love that all of the Kardashians, that they’re working hard and that’s admirable. And I think that’s great, and I wish Kendall [Jenner] all the best with her modeling, or whatever they are working towards.” Farrah also said that she felt for Kim and Kendall after they were laughed at during the Emmy Awards on September 22. The audience audibly jeered the sisters and stars of Keeping Up With The Kardashians while they presented an award. Farrah, who was in attendance, was appalled.

“Like, we’re talking about reality TV and they are presenting an award for that, and that’s what they are doing… I think a lot of people need to support them,” Farrah said, frustratedly. “It was kind of hurtful when we should be lifting women up [and] embracing women. A lot of the women who were up there receiving their awards were saying when women step out of line, support them, help them grow, flourish.” You can listen to Farrah talk the Kardashians, Teen Mom, and more on the FoodGod podcast HERE.