The West girls are in the building! Kim Kardashian and daughters North and Chicago rocked head-to-toe Yeezy looks for Kanye’s ‘Jesus Is King’ album listening party in Harlem on Sept. 29, and we can’t get enough of their outfits!

Talk about a decked out girl squad! Kim Kardashian‘s daughters are already fashionistas. The KKW Beauty founder, 38, and her girls — Chicago, 1, and North West, 6 — sported Yeezy looks as the trio made their way to Kanye West‘s Jesus Is King album listening party in Harlem, New York on Sunday. Kim held hands with the girls as they all supported Ye’, 42, in different Yeezy sneakers and cool camouflage and navy looks.

Kim stepped out in an oversized camouflage puffer jacket with a white top underneath and leather trousers. She sported beige suede sneakers with a platform bottom. The Keeping Up With The Kardashians star let her dark hair down with loose waves, as she donned dark eye makeup and a pinkish-nude lip.

Meanwhile, her mini me, Chicago matched her mom in camouflage print. The 1-year-old wore a tiny camo jumpsuit with navy blue Yeezy Kicks. Chi rocked two little pigtails as she carried a white stuff animal, along with the one hanging from her aqua-colored binky. 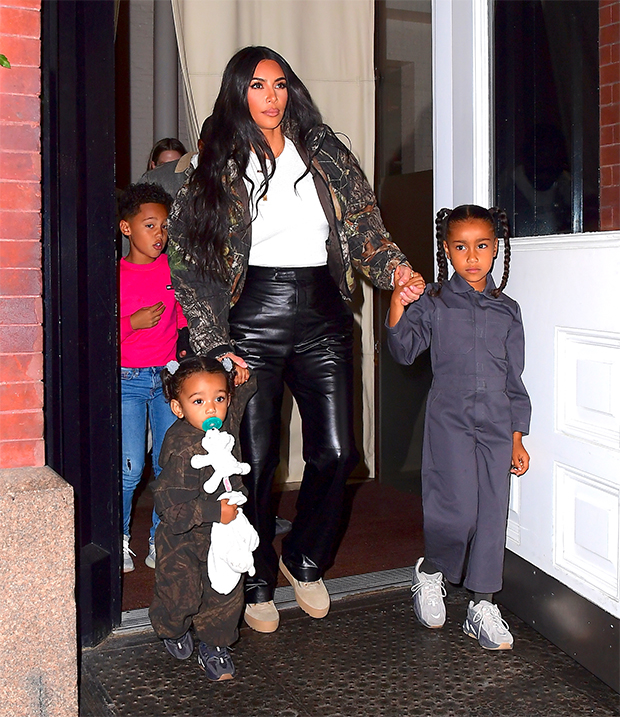 The eldest of the West children, North, looked fierce in a navy blue jumpsuit with a collar and pockets. She wore grey two-tone Yeezy sneakers and kept a poker face on for the paparazzi. North stepped out with her long brunette hair in two braided pigtails.

Kim, Chicago and North were pictured heading to Kanye’s last and final listening party of his Jesus Is King: A Kanye West Experience on Sunday in New York. Before that, the Grammy-winning rapper held listening events in Chicago and Detroit, where the latest Sunday Service was held. Aside from Ye’s new Gospel-inspired music, the listening parties also revealed that the album will be accompanied by a film that will exclusively hit IMAX theaters on October 25.

Kanye’s Jesus Is King was originally supposed to drop on September 27. However, after needing some “final tweaks to mixes”, the album’s release was delayed, according to an Instagram post from Kim. As of September 30, fans were still waiting for the album.