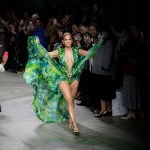 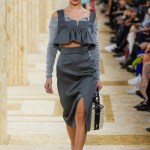 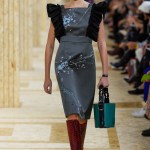 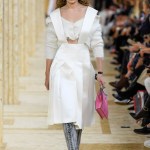 Bella Hadid, homie…can’t get it? Unless Tyga was suffering from a case of RBF, it looked like the rapper was giving the model major stink eye as she made her way down the Thierry Mugler runway during Paris Fashion Week.

Tyga, 29, had a front-row seat at the Thierry Mugler SS20 show on Sept. 25, but he didn’t look too impressed when it was Bella Hadid’s turn to strut down the runway. A perceptive Paris Fashion Week attendee caught Tyga scrunching up his face on camera — stink eye in full force — when Bella passed by the rapper’s seat. Even more awkward is Tyga’s connection to Bella — she’s part of Kendall Jenner’s tight-knit group of supermodel confidantes. You know, the same model who happens to be the older sister of Kylie Jenner, 22, who was once Tyga’s longtime girlfriend!

Let’s also not forget that one line in Tyga and Iggy Azalea’s 2018 collab, “Kream” — “Bella Hadid, homie could get it.” Many fans wondered if that was a jab at the model’s sneaker interview with Complex, but that remains a mystery. To be fair, there are other possible explanations for Tyga’s grimace — maybe he wasn’t a fan of Bella’s sheer thong bodysuit-blazer with butt cutouts, or perhaps the room was too hot. Also, this could all be blamed on unfortunate timing — who hasn’t been photographed mid-RBF (resting b**tch face), despite being in a pleasant mood?

Aside from that one line in “Kream,” there has also been no reported beef between Tyga and Bella. They were even rumored to be flirting after Bella posted a clip of her making kissy faces to Tyga’s track, “Temperature,” in Feb. 2018, which Tyga reposted to his Instagram along with a shout-out to the model’s handle!

Bella has been been walking a storm throughout Fashion Month — she walked in shows for New York Fashion Week, London Fashion Week, Milan Fashion Week and now, Paris Fashion Week! Meanwhile, Tyga has been enjoying the innovative designs for Spring Summer 2020. After attending Thierry Mugler’s show, he went on to join the crowd at the YProject show in Paris on Sept. 26.