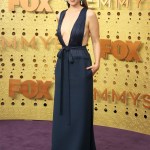 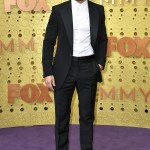 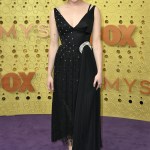 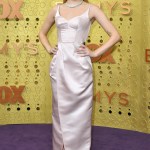 The ‘Game of Thrones’ cast is coming. Months after the record-breaking series finale, our favorite ‘GoT’ stars like Kit Harington, Emilia Clarke, Sophie Turner, and more reunited for one epic Emmys.

The stars of Game of Thrones first slayed on the Emmys purple carpet. Emilia Clarke wowed in a plunging navy gown from Valentino, Maisie Williams sizzled in a black dress, and Sophie Turner was a vision in a light pink silk gown. Kit Harington looked so handsome on the purple carpet. This was his first official appearance since going to rehab in May 2019. He looks happy and healthy! The Game of Thrones nominees graced the stage to honor the show.

“As much as we wish the show would have gone on forever our time had come,” Maisie said. “Now we have a chance to thank all of those who watched.” Sophie added, “It’s amazing how the entire last season was for us,” The cast received a standing ovation when they walked out together. Other cast members were standing in the audience cheering them on. Peter Dinklage went on to win Best Supporting Actor in a Drama Series and the show won Outstanding Drama Series.

The show is nominated for a staggering 32 nominations. Game of Thrones has already won 10 Emmys after last week’s Creative Arts Emmys. It’s the only to be nominated in every single category this year. Kit, Emilia, Maisie, Sophie, Peter, Gwendoline Christie, Lena Headey, Alfie Allen, and Nikolaj Coster-Waldau are all nominated in the acting categories. Game of Thrones is stacked at the Emmys, to say the least. The show is also nominated for Outstanding Drama Series.

The series finale, which aired in May 2019, broke records with 19.3 million viewers. However, the final episode of the epic HBO series encountered its fair share of controversy. Many fans were left furious over how rushed the final season seemed and the fate of Daenerys Targaryen. After destroying King’s Landing with Drogon, Jon Snow took matters into his own hands and stabbed Daenerys right in the heart. A legion of fans even started a petition to remake the final season.

Despite the show coming to an end after 8 game-changing seasons, the Game of Thrones universe is expanding. The prequel series is set to premiere in 2020. Naomi Watts, Jamie Campbell Bower, and Toby Regbo star in the all-new series. On top of that, another spinoff centered around House Targaryen is currently in the works.