Jax Taylor is laughing off rumors that his marriage to Brittany Cartwright is in trouble. The Vanderpump Rules star, 40, explained why he doesn’t wear his wedding ring in an exclusive interview with HollywoodLife. The SUR bartender even admitted that his wife, 30, sometimes doesn’t wear hers, either.

“I don’t ever wear my wedding ring. I just don’t. I’m not a jewelry guy,” Jax told us at Carl’s Jr.’s Ultimate Avocado Brunch, in which he hosted in celebration of the restaurant’s new Guacamole Double Cheeseburger on Thursday, September 12. “I go to the gym, I’m working in the yard. At my house, my wife doesn’t wear hers either. And my wedding ring is big, so it gets in the way and all that,” he explained.

Jax went on to question why it’s such a “big deal” to critics that he doesn’t wear his wedding ring. “I don’t know if it’s a slow day in the gossip magazine world or whatever, but many people I know don’t wear their wedding rings,” he proclaimed. And, when it comes to going ringless, Jax said he and his wife are on the same page.

“We wear it when we need to wear it, like when we go out and stuff like that, but around the house and stuff, no,” he explained. “And, every time they [paparazzi] catch me not wearing my ring, I’m either at the gym or at my house.” At the end of the day, Jax thinks the rumors that his marriage is suffering “are silly.”

Jax and Brittany tied the knot in her native Kentucky in June, and moved into a lavish LA home earlier this year. 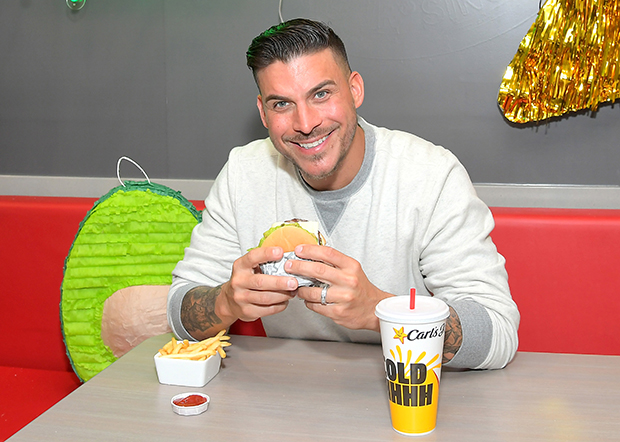 As Jax laughs off the breakup buzz, he enjoys indulging in a guacamole double cheeseburger from Carl Jr.’s, along with Brittany.

“What don’t I love about the burger?”, he quipped. “This is one of my few vices that I have in fact is fast food and we probably get, I’m not even stretching the truth we probably get Carl’s Jr. at least once a week if not more. I do.”

Carl Jr.’s has become a routine cheat-day spot for the newly married couple. “Brittany loves the avocado toast and I love the burger. So now that they have the avocado burger, it makes it so much better!”