Jennifer Lopez had a scary moment while at the premiere of her new “Hustlers” film at Toronto International Film Festival on Saturday. The singer, 50, was standing up and waving to the crowd inside the theater when she appears to have fallen forward onto a balcony ledge overlooking the venue. Jennifer quickly stopped herself from tumbling over the railing of the balcony by putting her hands forward to lift herself up. However, (as seen in the video above) it was a close one!

In the clip, courtesy of TMZ, the crowd in attendance can be heard gasping as Jennifer slipped. It’s unclear how the mishap occurred, but, it was her recovery that had fans cheering just moments after. The actress stood tall, smiled and waved to the crowd as she prevented what could have been a very dangerous incident.

Despite the unexpected event, Jennifer looked stunning at the red carpet premiere in a plunging yellow gown that featured a daring front slit. She wore a pair of silver open-toe stilettos and carried a jeweled clutch that represented a stack of money, in honor of her stripper-inspired new. She stars in Hustlers, out on September 13, alongside a killer cast including, Cardi B, Keke Palmer, Constance Wu, Lili Reinhart and Lizzo. 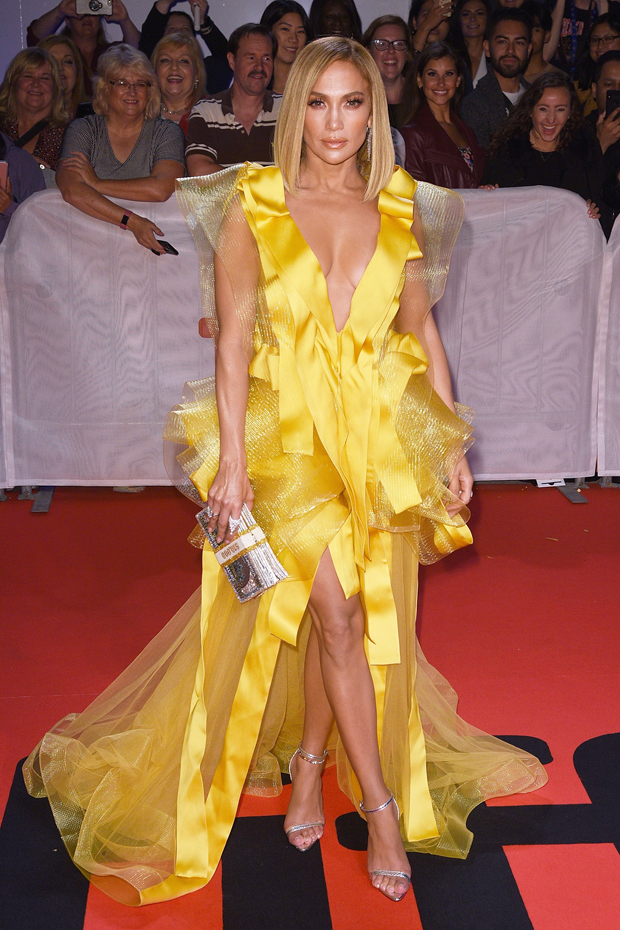 Another shocking moment during the night happened as soon as JLo hit the red carpet. She debuted a new blonde lob, courtesy of her stylist, Chris Appleton. The stylist to the stars shared a photo of JLo’s new hair, captioned “shiny and short thanks”.