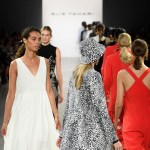 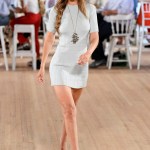 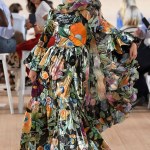 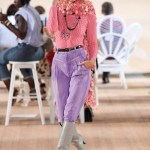 Ashanti turned heads on Sept. 8 when she showed up to the highly anticipated PrettyLittleThing X Saweetie show during New York Fashion Week in a revealing green and black outfit that let a lot of skin peek through.

Ashanti‘s still got it and she wasn’t afraid to prove it at the PrettyLittleThing X Saweetie fashion show on Sept. 8! The gorgeous 38-year-old singer danced and performed at the New York Fashion Week event wearing a very revealing green and black outfit that consisted of a green and black striped crop top that had an open front with a black criss cross design that showed off her cleavage, a black belt, and green and black pants that opened in the front and revealed tiny matching panties. She also wore black thigh-high boots that perfectly fit her curvy figure and a matching hat.

Although the show wasn’t a debut of her own collection, Ashanti has collaborated with British fashion brand PrettyLittleThing before. She launched the PrettyLittleThing x Ashanti Swim Collaboration in June so it’s only natural that she would show up the their latest event.

The “Foolish” singer joined other celebs at the popular show, including Lil’ Kim, who also performed. Like Ashanti, the rapper wore a sexy outfit that consisted of a black bustier under a long metallic dark orange blazer and black panties. Since the fashion show was meant to debut Saweetie‘s collection with PrettyLittleThing, she also performed and rocked the house in a silver glittery ensemble.

The audience at the special show was full of familiar faces such as Nicky & Paris Hilton, Love Island star Molly-Mae Hague, Terrence J, Fat Joe, and Remy Ma. They were all equally dressed to impress in their seats and on the red carpet before the event, proving stylish choices is not just for performers and models!

We’re excited to see what else Ashanti has going for her next. With a new album underway and her performance abilities still strong, there’s sure to be a plethora of opportunities coming her way!