Not only did Brad Pitt debut a more fit physique at the Venice Film Festival, but he showed off some new ink too! The actor appears to have a new tattoo near his matching ink with ex-wife Angelina Jolie. And, we dig it!

Brad Pitt just gets better with age — and more tattooed, as seen in new photos of the actor, 55, at the Venice Film Festival. The Once Upon a Time In Hollywood star appears to have added some new ink to his body, located on his inner (and very muscular) bicep. The actor was photographed arriving in Italy ahead of the Venice International Film Festival on Tuesday, when cameras caught the dark ink of a man’s silhouette standing over his shadow peeping through his t-shirt.

Brad’s new tattoo is also located near another meaningful tattoo that he shares with ex-wife, Angelina Jolie. The actor’s new ink is positioned next to a quote from a poem by Rumi that reads, “There exists a field, beyond all notions of right and wrong. I will meet you there”. Brad shares the quote with Angie that the two got to symbolize their 2014 wedding.

It’s unclear what exactly Brad’s new tattoo means, or when he underwent the new branding. And, it’s also begged the question if the new ink is the start of a cover-up piece to get rid of his shared tattoo with his ex-wife, 44. Either way, Brad was looking mighty fine at the annual festival — muscles and all. 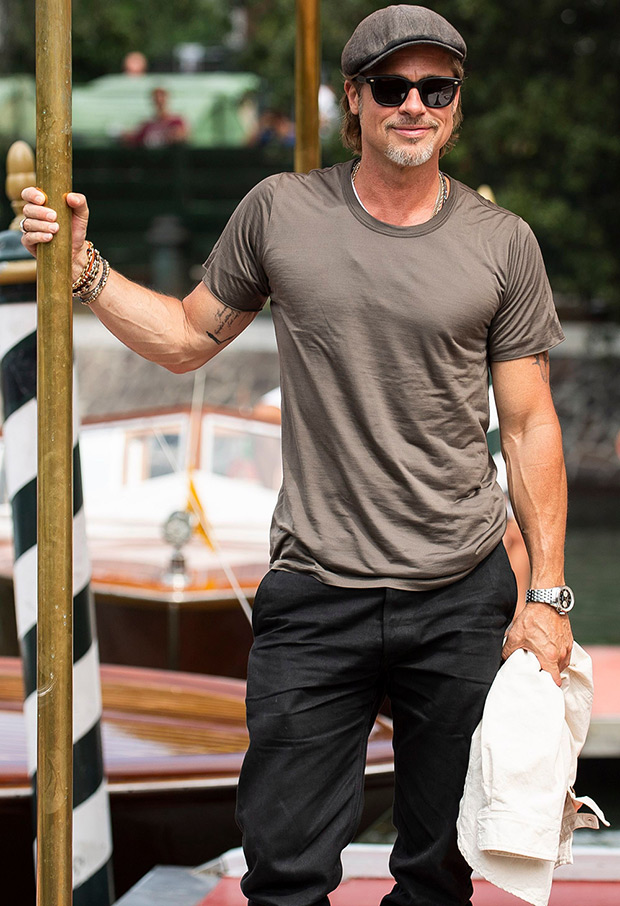 The tattoo adds to Brad’s already hefty collection of ink, which includes the first initials of each family member; lines designed by Angelina; his ex-wife’s birthday; an outline of Ötzi the Iceman, and the word “Invictus”.

Brad and Angelina split in 2016 after a very messy and public divorce and custody battle. While they were only married for two years, Brad and Angie were together for a total of 12 years. He and Angie share six children together — daughters Zahara, 14, Shiloh, 13, and Vivienne, 11, and sons Maddox, 18, Pax, 15, and Knox, 11. 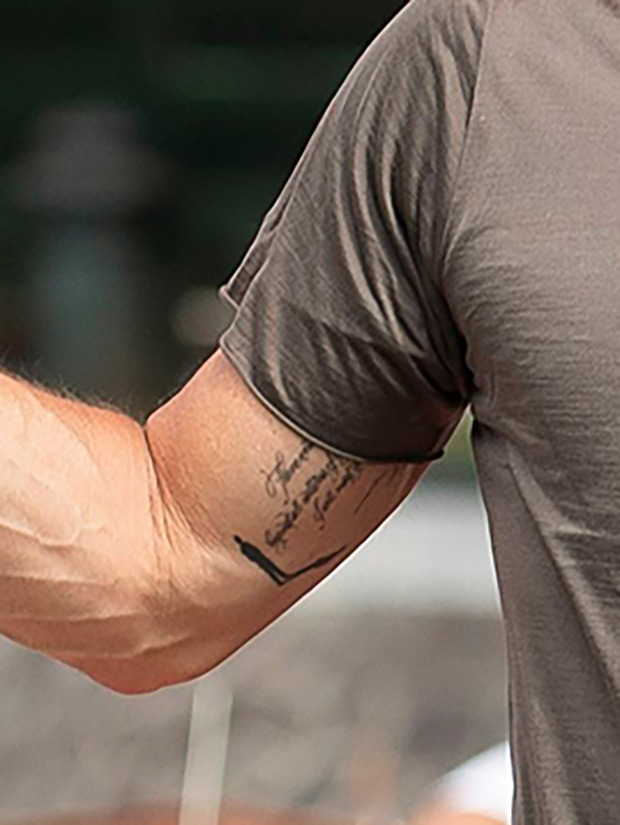 Brad is on hand in Italy to promote his new space thriller Ad Astra.  The fantasy drama, directed by James Gray, stars Brad as an astronaut who travels through the solar system searching for his father (played by Tommy Lee Jones), a renegade scientist who threatens the future of planet Earth. Donald Sutherland and Ruth Negga also star in the film. Ad Astra hits theaters on September 20, not too long after the success of his Quentin Tarantino-directed film, Once Upon A Time In Hollywood, which he starred in alongside Leonardo DiCaprio.