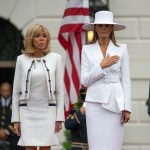 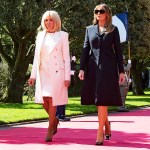 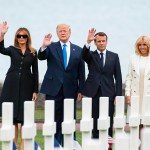 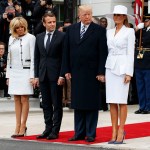 After she reportedly underwent a 3 hour cosmetic surgery procedure earlier this summer, France’s First Lady, Brigitte Macron, stepped out looking vibrant and healthy on Aug. 19, and we have before and after pics.

France’s first lady, Brigitte Macron, 66, stepped out for the first time on August 19, following reports that she recently went under the knife. The wife of Emmanuel Macron, 41, made a quick recovery though, and looked gorgeous. Brigitte appeared to be in good spirits and was wearing a pale blue dress with gold detailing on the waist. She was all smiles as she accompanied her husband to a meeting that morning, following a three-week break from the spotlight. The couple was photographed giving a warm welcome to Russia’s President Vladimir Putin at their summer residence, the Fort de Bregancon on the French Riviera. Brigitte and her husband hosted Putin for dinner following their meeting.

The First Lady kept her beauty look simple for the outing, and one would have never known that she may have gone under the knife. Reports from local French outlets surfaced earlier this summer claiming that Brigitte had been hospitalized for a cosmetic surgery procedure at the American hospital of Neuilly-sur-Seine. Brigitte was said to have met an “eminent and media aesthetic surgeon” Tuesday, July 16, before being operated on the next day “for three hours,” according to local publications Le Point and Weekly Closer.

Cosmetic surgery or not, Brigitte manages to look chic and put together every time she steps out, and in June of 2019, she did just that when she was photographed with America’s First Lady, Melania Trump, 49. In honor of the 75th anniversary of D-Day, the two first ladies arrived in Normandy alongside their husbands for a French-American ceremony at the American cemetery of Colleville-sur-Mer. At the time, Brigitte chose to wear all-white for the occasion, opting to wear a high-neck ivory fitted dress that ended just at her knees, with a gorgeous white Louis Vuitton double-breasted coat.

It’s so great to see France’s First Lady looking so vibrant and healthy after laying low to recover from the reported surgery. Brigitte looked fresh-faced at the meeting and her vivid blue dress provided the perfect pop of color for her first appearance back in the spotlight.