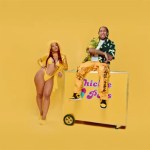 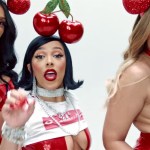 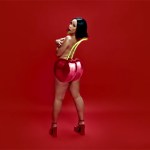 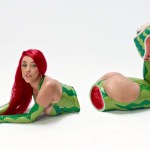 Doja Cat’s big booty anthem, ‘Juicy,’ was treated to colorful visuals, wild outfits and a feature from Tyga! After going viral with her ‘Mooo!’ music video, this rapper and singer is trending once again.

Doja Cat, 23, is keeping it juicy and real. The singer’s ultimate ode to natural bodies, curves and big butts, “Juicy,” now has a music video and new lines from Tyga, 29! The visuals dropped on Aug. 15 and they’re already trending on Twitter. To match a rap song with lyrics like “I keep it juicy juicy, I eat that lunch,” the music video opens on a shot of Doja in the nude, save for chunky red platforms and a gigantic cherry covering her derriere. The video proceeds to explode into a parade of primary colors, Gen Z-approved outfits and more produce than in a Fruit Ninja game (ah, the innuendos).

Doja changed into one outfit after another for each scene. Of course, each one is booty-baring. There’s a skintight watermelon jumpsuit, a green and white-striped Adidas co-ord, yellow and purple bikinis, and an abundance of transparent pieces to show off Doja’s beautiful bod! We expected nothing less from the forward-thinking artist who showed up to the 2019 BET Awards red carpet with feathers sprouting from her back. Tyga is also treated to a zesty makeover with yellow sweats, matching the hundreds of lemons he stands in at one point. You can check out even more shots from the music video in HollywoodLife’s gallery above!

Doja even gave her music video partner a shout-out on Instagram. “@tyga dropped 🔥 on the Juicy remix and we had an amazing shoot. Shout out to our onset hypeman I forgot ur name but I didn’t forget that energy 💛🍋🍋🍋🍋🍋🍋🍋🍋🍋🍋🍋🍋🍋🍋🍋🍋🍋🍋🍋,” Doja wrote under a clip of Tyga on Aug. 14, and those sentiments were resounded throughout Twitter! “Something told me #Juicy was gonna hit and @DojaCat hasn’t disappointed me since Moo dropped She just shot this video and I’m living for the whole treatment and a @Tyga feature always hits 💥,” one fan tweeted on Aug. 15, referring to Doja’s last hit, “Mooo!,” which racked up more than 52 million views on YouTube since dropping in 2018.

okay but can we talk about the looks doja cat served in the juicy video🥵😍😍 pic.twitter.com/vmZ2TjliHu

Doja Cat came through with all that naturally curvy goodness. What a total babe 😍 https://t.co/Hv6sPk1X3m

Other fans were focused on Doja’s risqué yet trendy wardrobe. “Okay but can we talk about the looks doja cat served in the juicy video,” one such viewer tweeted, while another fan posted a GIF of Danny DeVito and wrote, “Creative genius.” Doja originally released a solo video for her “Juicy” track for the A COLORS SHOW YouTube channel on March 25, and she also partnered with rapper Rico Nasty for the music video to their collab “Tia Tamera” that was released on Feb. 21. It has been a busy and colorful year for Doja!